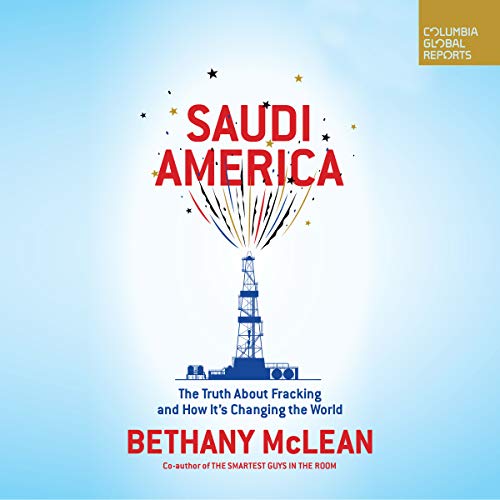 The technology of fracking in shale rock - particularly in the Permian Basin in Texas - has transformed America into the world's top producer of both oil and natural gas. The US is expected to be "energy independent" and a "net exporter" in less than a decade, a move that will upend global politics, destabilize Saudi Arabia, crush Russia's chokehold over Europe, and finally bolster American power again.

Investigative journalist and bestselling author Bethany McLean digs deep into the cycles of boom and bust that has plagued the American oil industry for the past decade, from the financial wizardry and mysterious death of fracking pioneer Aubrey McClendon, to the speculators who are betting on America's ascendance and the collapse of OPEC in the great game of geopolitics. McLean finds that fracking is a business built on attracting ever-more gigantic amounts of capital investment, while promises of huge returns have often not borne out. Overeagerness in partaking in a boom can lead to all types of problems and just as she did with the Enron story, in Saudi America McLean points out the reality and the risks of the inflated promises of the fracking boom.

What listeners say about Saudi America

Must read for anyone interested in geopolitics or energy.

This is worth listening to after you listen to either of Peter Zeihans two recent books. Specifically, this book discusses some of the disruptions shale may cause that Zeihan may not have considered.  It also presents a sort of schizophrenic melange of mild Anti-Trump screeds that are worth listening to.


I especially like the praise of China's “carbon trading system”!  Get a load of this chart you will not find in the book. Coal consumption chart.
https://www.eia.gov/outlooks/ieo/images/figure_4-2.png The author also hints the administration's coal policy could kill the shale revolution!


By itself this book is worse than useless to anyone new to the topic.  But it is useful once you read Zeihan.


And of course we have the imminent collapse of hydrocarbons because renewables will be so cheap as to drive them from the market. The author seems to believe twenty years is about right.


Finally,  the author seems sympathetic to delay fracking to “save fracking” hydrocarbons for future agricultural fertilizer needs. “Imported oil is not your enemy,  it's your friend.”


At least so says this ‘Jane Fonda’ of planet salvation. She believes in delayed gratification; we should pay more for imported oil instead of grabbing for cheap domestic fracking sources like a child. After all, we will eventually need it for fertilizer to feed ourselves.


In summary,  this book is a perfect exhibiton of hopeful coersion “because it is good for you”. Then rattles off one policy after another throughout the book.  She especially disdainful that US has no strong energy policy. She seems to like the Chinese approach.

Very informative. I comfortably settle with the Charlie Munger philosophy. Read beginning to end and see what you think.

This was such a great read -- tons of information and written with a financial perspective that reads very objectively. It's a very "meat and potatoes" kind of text and reporter McLean deserves so much credit for her thorough and dutiful work throughout this piece. If you have concerns about fracking and the fossil fuel industry, in conjunction with its financing (private and public) methods, look no further.

The title says it all. The economics of the Fracking without environmental aspects of it.

super quick listen the lot of great information that paints a picture I had never seen put together this way before. definitely worth it for economic political and current events reasons

Many futures exist for fracking. Typically one follows the money , but unfortunately it’s not that simplistic. The future is unwritten, but Bethany has provided the star maps for the voyage, may the seas be favorable and the wind at your back!

I adore Bethany McLean's books and this one didn't disappoint. However, she should have recorded it herself. She has a great voice for recordings and as the author can reliably give words the correct emphasis. This one was recorded with a voice that sounded computer-generated with zero emphasis on the right syllables. Get this book on paper and get recordings when the author records them.