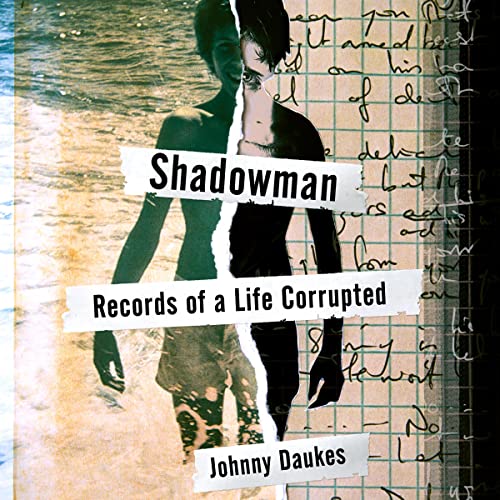 Johnny Daukes’ memoir Shadowman tells the story of a young life corrupted by sexual abuse and a subsequent journey writing music, comedy and film that amounted to an unconscious recording and processing of that early trauma. The author’s experiences playing in bands, writing and performing radio and TV comedy and refusing to be defined by the inexplicable events of his youth makes for a fascinating, compelling and frequently hilarious dissection of an unconventional life.

Shadowman becomes more complex and outrageous with every chapter: The malign presence in the family of the Catholic sect Opus Dei, the abuser becoming part of the family through marriage, the terrible realisation as further victims come to light. And yet all the time, Johnny Daukes walks a fine line between making your heart break and your sides ache.

With frequent reference to lyrics, sketches and scripts that he wrote throughout his career, at the time unaware of their true significance; this is a memoir that laces brutality with hilarity, trivia with profundity and showbiz excess with lacerating self-analysis.

Written with an irreverence that conceals big questions about pain, art, memory and love, this is a unique book that is melancholy but never mawkish and at its heart is an affirming appetite for life. The rich and eclectic production of the audiobook betrays Johnny Daukes’ background as comedy writer, musician, voice artist and recording engineer and it oozes the rackety gallows humour of a true maverick.

"Johnny Daukes' compelling memoir navigates both darkness and exhilaration with intensity and painful candour but also joy and wit. This is a book that is often melancholy but never mawkish and at its heart is an affirming appetite for life." (Stuart Maconie|)

"What a unique book Johnny Daukes' Shadowman is. On the surface it's memoir, but at its heart it's a book that wrestles with big questions about pain, art, memory and love." (Mat Osman)

What listeners say about Shadowman