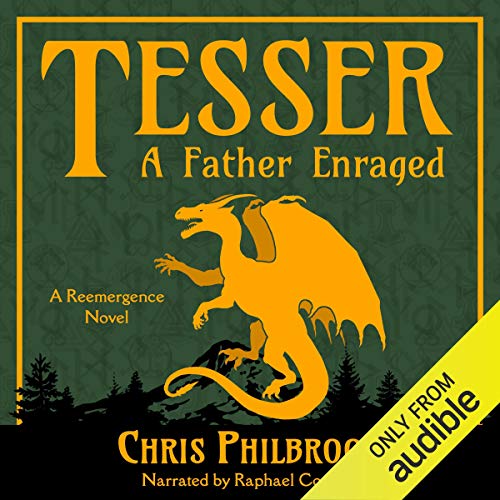 Tesser, dragon of life, immortal force of Earth, has his hands full.

He's a father to a dragon child that's about to turn one. A dragon child that smiles, laughs, knows a few words, and is the source for all magic on Earth. So long as he has Matty - Astrid's mom, and the love of his very long life - everything will be okay.

So they're gonna party with the trolls, who celebrate Matty's distant troll lineage like she's one of their own, and you best believe they celebrate the dragon child that shares a tiny bit of their blood, too.

But not all trolls are happy with their situation beneath the Jotunheimen Mountains in Norway. Some of the ancient monsters want change; some hate it. All are nervous, and excited.

But some forces in the caverns of Ygg'rasgard want change that requires blood to be spilled and for a little girl to be taken from her mother and father.

Better than book 3 but could have been better, author needs to spend more time developing the story, and not rushing the ending

I've enjoyed the other books in this series however, this story was slow moving and fell flat for me.

Decent but felt a little underwhelming

I really enjoyed the Reemergence series as a slightly different take on the whole modern fantasy genre. The first couple of books were good with an interesting take on a new world where magic has returned and larger than life players have reentered the field. The problem is this book feels like what happens to all series, the writer is running short on ideas and is taking a grain of sand of an idea and then trying to fill it until a full novel. No spoilers obviously but there are way to many moments of "wait there is this thing you didn't know about" and the obvious MacGuffin's don't really help things much either.

Overall, it's part of a series and I will check out the next (cautiously) but if this is indeed the final reemergence novel, it's safe to skip it.

Not a fan of "Nice" Teaser. I really want to Ed him to go primordial on those bastards.

Narration was great as always though!

A great book and another great entry in a series

This is book 4 so spoilers are impossible to avoid from books 1-3, go read those!

So each book of the Reemergence has balanced phenomenal cosmic powers, social upheaval, expanded the range of species and mythologies, oh and made me laugh along the way. This book does all of those things and more. Tesser develops more as the Dragon of life and as a father. Mattie's heritage and role in the world get explored and expanded. Astrid is well a mixture of amazing, cute, and well a dragon. The Trolls are a fascinating example of evolution and rigid society, and I loved every minute of it. I am just finishing this as book 5 comes out so onwards to a news story and a new dragon can't wait to see what's in store.

Raphael Corkhill fills the roles of Trolls, Dragons, and humans very well and I look forward to hearing him in book 5 as well!

Another great read by Chris Philbrook! It's wonderful to see the dragons personalities develop more with each book and this definitely shows us a more complex Tesser. In addition, we learn so much more about Mattie and you will not be disappointed. I highly recommend this series and can't wait to see where the story takes us next!

One last, but not least thing, the narration is superb!!

Every book in this series exceeds expectations!! One of the best fantasy series out there and the Dragons are wonderful!! Great read and reader!! I hope the author continues this series as it's so well done.

Performance was great. Story was good but wasn't as good as previous books. Overall felt short and lacked something not sure what but felt like a thin storyline. I still loved it though, hope future books are closer to first books.

Another great story from Chris filbrook

This was not my favorite out of the series but it was enjoyable nonetheless. I really appreciate the time and effort you put in to keeping us entertained thank you for hours of entertainment Mr. Author man

Great story and performance would definitely recommend this book and the entire series, cant wait for the next book !