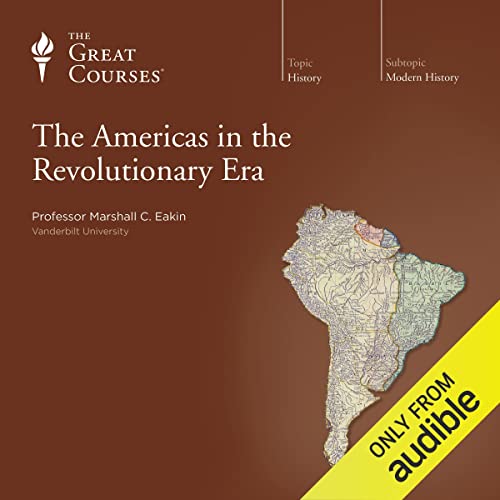 The Americas in the Revolutionary Era

Go on an in-depth, 24-lecture exploration of important (and often overlooked) questions about the tumultuous political history of the Americas. Professor Eakin explains the cultural, economic, and political pressures each of these new American nations faced in achieving independence. In addition, he examines exactly why each revolution progressed, and succeeded or failed, as it did. Beginning with the revolution in our own 13 colonies, these lectures examine the uprisings and invasions that created the independent nation of Haiti in 1804; the wars for independence in Spanish South America; the bloody uprisings that led to Mexican independence; and the relatively bloodless revolt in Brazil. You'll also consider "counterexamples" of nations that failed to become independent or followed unusual patterns, such as Cuba, Puerto Rico, and the British West Indies. You'll also meet the "other" founding fathers of the Americas, including Toussaint L'Ouverture, José de San Martín, Bernardo O'Higgins, and Agustín de Iturbide. Throughout these lectures, Professor Eakin brings his perspective down to ground level, spanning oceans and mountain ranges to translate those forces into dramatic events, including: a riveting portrait of life among the slaves of what was then known as Saint Domingue (later Haiti); a brilliant description of the chaotic evacuation of the Portuguese royal family as they fled to Brazil only an hour ahead of Napoleon's troops; and the bold exploits of Simón Bolívar, including his remarkable and dramatic march from the tropics of eastern Venezuela through the 13,000-foot passes of the Andes to defeat the Spanish at Boyacá and liberate Colombia.

What listeners say about The Americas in the Revolutionary Era

No, I wouldn't recommend this book to a friend.
Well, it's not really the "audio quality" as much as the production value. To explain, after each sentence there is a 1-3 sec pause, all background noises and static cease and the "dead air" interrupts adding a level discontinuity to lecture. My assumption is that a noise gate was used on the mic or the production engineer used an automated noise reduction that doesn't work well with spoken word. That said, this is more of an issue with headphones - you might not notice if listening on a poor quality player.

I applaud TGC for offering this course and for Professor Eakin taking it on because it is a neglected one . Rarely do we see any content on Central and South America in the TGC catalog or elsewhere in academia. Professor Eakin's scope is spot on covering all of the major revolutions and the formation of over 20 countries.

What this course lacks is pizazz. The professor's narration doesn't fully engage, does not put you in the historical moments themselves (like a great instructor can like Professor Desan in "Living the French Revolution and the Age of Napoleon"), nor build up any kind of drama or storytelling. The exceptions would be lectures 10 (Napoleon’s attack on Portugal and Spain and its impact on their colonies in South America), 19 (Brazil), and 20 (Cuba, Puerto Rico, and Dominican Republic). The rest were devoid of any kind of real storytelling.

Battles are rarely described in any kind of detail, very little time is dedicated on the opposing forces except to call them “the Spanish armies” (who were some of the generals? Their strategic and tactical aims?), and the motivations/thoughts/words of the revolutionary heroes aren’t discussed much except that they wanted power. Another indication he isn't a good storyteller: the professor opens up most lectures by providing a summary of the major events he will be covering in that lecture. Talking about taking all of the suspense away in the first few minutes! Why not let the story play itself out while recounting the events? I know these are educational courses but TGC also bills them as "entertaining journeys".....

Unfortunately, the negatives don't end there. The pitch of the professor’s voice changes multiple times in the same sentence resulting in certain words coming through the audio way too strong while other words were too soft or trailed off. It wasn’t too long before the sharpness grated on me.

Additionally, following some of the revolutions (such as the Haitian, Mexican, and Paraguayan revolutions) was very difficult: too many different sides with different goals, key leaders switching sides, and multiple foreign powers involved with ambiguous aims. Not a good job by Professor Eakin to clarify the madness and allow us to keep score. At times I wasn't sure what side he was even describing.

Like his course "Conquest of the Americas", professor Eakin uses numerous lectures to serve as the course's conclusion depriving us of more historical narrative on the specific revolutions. While this time he only used two, he easily could've fit his conclusions in one lecture.

Despite all of this I would still recommend this course. Primarily for two reasons: where else can you get info on these countries? And secondly: despite all the grief I gave him I actually like Professor Eakin. His organization is admirable and he does cover all the right things (he gets the scope right). A lot of professors lack these two talents!! He also gets you to think of the United States revolution in different terms: as a part of a larger story/theme playing itself out throughout all of the Americas. This story is not taught in traditional text books (at least when I was in school). It is thought provoking to look at the American Revolution as but one event in a fifty year period of revolution and upheaval in the western hemisphere. I also liked his analysis on why Latin America did not develop into a world power like the United States.

While I prefer his other course ("Conquest of the Americas") more I am happy to have this one in my library as well. It may not keep me on the edge of my seat but it does fill a missing gap.

Very easy to understand, because the professor talked slowly and explained every thing. I am from Colombia, and our history of independence was not explained In detail, but the same is true for all the other countries , if you want details I guess you have to read the history of each country. I learned many I interesting things about our America with capital A !

I've actually listened to this series twice too catch up on history of the revolutions as i make trips to Latin America. I'd recommend it to anyone with an interest in how the countries on the American continents got their start.

This is a compelling topic. The lectures are informative and well thought through. The performance on the other hand is so poor that spoils the whole effect. Too slow, emotionless, just boring.

Good and solid survey of the history of American revolutions. The lecturer was a little boring.

Well structured. Gives you a good overview of the period and key factors, with a taste of the personalities of the individuals concerned. The lecturer sounds a bit frustrated and disengaged at times. Makes it less relaxing to listen to. 1 star removed for that. Nevertheless he''s consistently clear, and occasionally humorous.

Knew next to nothing about the revolutions and formation of the countries of South America. This went a long way to curing that. Although probably my lack of basic knowledge I did find myself using Wikipedia a bit.

Very good overview
Narrator's seconds-long pauses between words sometimes a bit annoying though
Overall very good, loved the inclusion of the oft-forgotten continent of South America rather than just focusing on USA as many series about 'American history' do

Excellent history and well delivered. it has made me want to read more especially some of the historical novels and biographies referred to. also made me see European history in a different light.