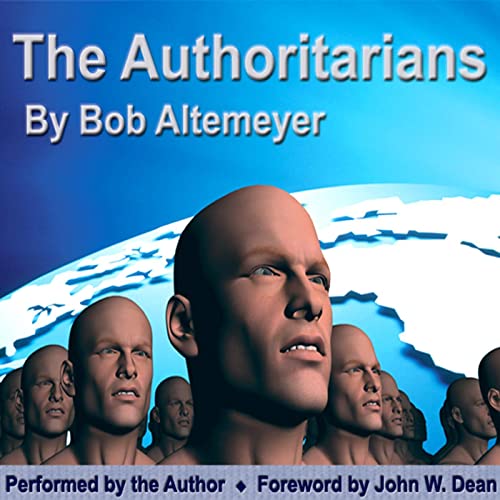 In the nonfiction audiobook The Authoritarians, psychologist Bob Altemeyer shares his research on the aggressive and hostile nature of the authoritarian personality and the rise of the Right-Wing Authoritarian personality in the United States. He wrote the book in 2006, during George W. Bush’s second term as president. In a clear and direct voice, Altemeyer performs his own fascinating work. He details how authoritarianism is destroying traditional conservatism and what this means for the future of American politics and democracy.

What listeners say about The Authoritarians

This turned out to be one of my favorite Audible books so far along with The Drunkards Walk. How Randomness Rules our Lives. I think it's actually an important book that's been flying below the radar because it wasn't commercially published. At least not at first, it may be now. Liberals, moderates, and conservatives alike, really need to read it. When you've finished you'll better understand not just Nazi Germany, but the IRA in Ireland, the Cultural Revolution under Mao, the war in Yugoslavia under Karadzic and even Pat Robertson. Explaining Pat Robertson is no small accomplishment but the authors index is the best explanation yet of radical Muslims as well. Have you ever wondered why there seems to be an endless supply of people willing to blow themselves up? Well that's because there is an endless supply and this book explains why that is. It all revolves around a way of thinking called the RWA index. RWA stands for Right Wing Authoritarian. An unfortunate title since it doesn't help his credibility with conservatives and conservatives need to read this as much as anyone. He chose this title I assume because in the US and Canada these people tend to gravitate to the political right more than the left but they're found on the left as well. A better title might have been the Muddle Headed Followers index. The index itself is politically neutral. Everyone knows a few of these of people. They're the ones in the office who don't reason from fact to opinion. Instead, they choose an opinion that fits the way they want the world to be, then select facts that support them. I personally know so many of these people I've begun to think that reasoning from fact to opinion must be something rare and difficult and maybe should be taught as a mandatory part of a civics class. It doesn't seem to come naturally in my area. But then look at where I'm from.

A must-read for... everyone

While Bob Altemayer's personal political stance is occasionally discernable from his analysis of data, and his investigation of the subject is quite America-centric, Altemayer provides us with a paradigm of surprising explanatory and even predictive power.

If you are interested in politics or psychology, I highly recommend this book. If you wind up taking offense at its presentation of scientific data, perhaps you need this book more than anyone. Authoritarianism is a potential danger to all of us, even on the individual level, and if you find you dislike hearing about it, it's a sure sign you need to listen more closely.

If you misinterpret the message of this book, you will find that it appears to be some professor trashing what appears to be single political groups. He isn't. The book does draw parallels between his theories on human behavior and current political issues, but if, upon reading this book, you find that he is getting too political, you are missing the message. These are observations, not opinions (for the most part).

This is a good choice for your next audio book. It's about the psychology of politics, why certain people are so angry when they discuss politics. There is a certain mindset and it is explained here. Very very interesting and read by the author very well.

Listened to over an hour and couldnt stand it anymore. Author is a boring propogandist left wing drone and doesnt deserve any professional title next to his name. Don't waste your money!!

Good information but too political

A confirmation and deepening of my understanding of why people accept the drivel which is the currency of American politics. However, in my opinion the author would have better served my needs, and his own, if he had omitted the political analysis. One other comment is that the treatment of the research results was too narrowly applied to American politics, and greater contrasts with international actors would have been very welcome.

Authoritarian politicians and their subjects

One of the points made by Altemeyer is that right-wing authoritarians are viciously intolerant of ideas and opinions that do not confirm the ideas and opinions given them by their masters. Look at statements made by low-scoring reviewers of this book, and you'll see what he means.
Sad that the people who could benefit the most from this book are those who would take the greatest offense.

Listen to this book to understand Donald Trump

Are you absolutely floored and confused as to how someone could support Donald Trump? This book will explain a lot of his popularity with good, hard, scientific data.

A must for political junkies and regular folks

Would you listen to The Authoritarians again? Why?

Yes The information is vital to understanding our future elected officials and their constituents.

The research and the results and how it impacts every one.

Have you listened to any of Bob Altemeyer’s other performances before? How does this one compare?

It was all very moving .

When John W Dean(you might want to Google that) witnessed some unconscionable behavior by some folks close to him, he sought out to try and explain and understand what exactly was going on. Dean has a lot of respect and close friendships with some very conservative people, one of them being Barry Goldwater (Google if you don't know ), who he wrote a very good book about. Dean had planned to write a book about conservatives and their conscience, with Goldwater but Barry became ill and passed before that could happen. Dean eventually decided to press on and while doing research he was drawn to Bob Altemeyer who was doing extensive research on authoritarianism. This research seemed to explain the behavior Dean was perplexed by. Dean befriended Altemeyer and drew from his research to complete his work. Altemeyer has been awarded the AAAS Prize for Behavioral Science Research but it doesn't seem he takes himself too seriously . The book was very informative, easy to absorb and enjoyable . It's very important materiel that might help some folks explain their own behavior or folks close to them . I chose the audible version of the book that Altemeyer himself narrates quite well and saved me some cash. I learned a lot from this material and recommend it to any and every one seeking a deeper understanding of politics, politicians and those who choose to follow them .

Eye-Opening, a MUST-READ for all.

Whether you consider yourself left-wing, right-wing, tea party, this book is very informative. Without being judgmental, the author (who has been a psychologist conducting scientifically verifiable tests for ~40 years on the subject, with tens of thousands of individuals studied) shows what his research has revealed.

A book everyone should read.

A complex subject written and told in layman's terms. A professor you should pay attention to.

A scary but in depth and informative look at how and why Trump-era republicans can seem so at odds with what they say and believe, and everyone else.

Could not be more relevant

This is a terrifying insight into the authoritarian mind, and a vital, entirely up-to-the-minute book. It seems to be almost entirely accurate in foretelling where we are now and how we've got here. The World Simultation experiments in Ch 6 are incredibly depressing but maybe if enough people get some insight from this we might just avoid what these are depicting, though I doubt it now. Thank you Dr Altemeyer.

Brilliant Study of a kind of thinking

This is a very interesting account of a certain mindset which seem more prevalent in the USA than in Europe. Prof. Altemeyer brings a hint of humour to his own reading of this book, so you get a real feel for a scientist at work, as well as his findings over many years. I would be delighted if there were more of his books available on Audible, as they would bring important work to a wider public - especially in this US election year.