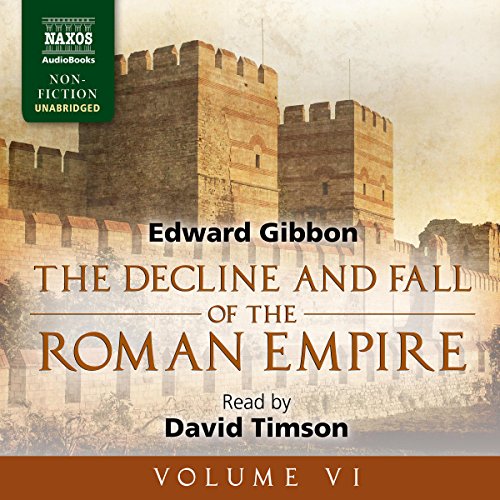 The Decline and Fall of the Roman Empire, Volume VI

In Volume VI (Chapters LVII - LXXI), Gibbon ends his masterful history by charting the rise of the Turkish nation and the birth of the Ottoman Empire, which becomes an unstoppable force as it eventually captures the remains of the Eastern Empire. Weakened under the continuing schism of the Greek and Latin Christians, the strategically important site of Constantinople becomes an easy target for Sultan Mohammed II much to the consternation and apathy of the West.

What listeners say about The Decline and Fall of the Roman Empire, Volume VI

Expand Your Vocabulary in Just 146 hours

Since all six volumes are of a piece I am reviewing it as such. This is a massive work and I will not attempt to extol all its virtues here. I have always had this on my reading list but knew that I would never devote months of reading time to tackling this history. This is a prime example of the superiority of the audio format in facilitating the assimilation of such lengthy books.

Here are my general impressions:

History is primarily an account of the leaders and ruling class. The vast unwashed masses pass through the halls of recorded history in abject silence.

The Roman Empire persisted for a very long time in many different forms. It is beyond my attention span to try to hold the entire span in my head. I admire Edward Gibbon for his ability to seemingly relate all these different eras with equal perspicuity. I will require a second pass through to more fully grasp

The influence of Christianity is the primary cause for the decline of the Roman Empire. One cannot hope to understand the underlying causes of the Roman Empire’s downfall without having a firm grasp of the doctrinal battles within the church. In order to make his reasoning clear to the listener Gibbon is careful to explain the fine points of Christian doctrine. He expounds, at length, the Arian heresy and its political implications. And, in a related episode, he relates the origins and expanse of the Mohammadan religion because of its impact on the Romans.

This is not merely a narrative history. Gibbon writes with high style and great aplomb. His humor is witty and droll and quite pervasive. The byzantine convolutions of this history are made beautiful by his flowing prose. This is a work of literature.

Either the common vocabulary of people in the eighteenth century was higher than that of people today or Gibbon has an incredible mastery of the English language, uncommon in any time. I prefer the latter.

David Timson has a wonderful sonorous voice; one quite suitable to hours of critical listening. His enunciation is crisp and his inflection perfectly suited to delivering Gibbon’s frequent backhanded compliments.

The greatest history ever written

The depth and breadth of this work is astonishing and breathtaking. From the time of the great emperors Gibbon leads one on a journey through the barbarian invasions that overspread all of Europe through the rise of the Muslim conquests in the Middle East the Crusades to the final all of Constantinople in a sweeping narrative replete with detail. Most impressive is the sheer volume of material from hundreds of sources that are constantly referenced in marvellous footnotes. And all told in the finest English prose ever put on paper. I was called from start to finish.I

A lot of details...not for the casual listener

Great if you want to follow a detailed heads down lecture. Absolutely not a book to keep your attention if you don't love history with all your being. I listen to books while driving and working out, this book just could not hold my attention.

Later books are a bit disorogonzied, different subjects are covered often spanning hundreds of years. Fall of Constantinople was fun, but the clear narrative of the books focusing on the western empire is absent.