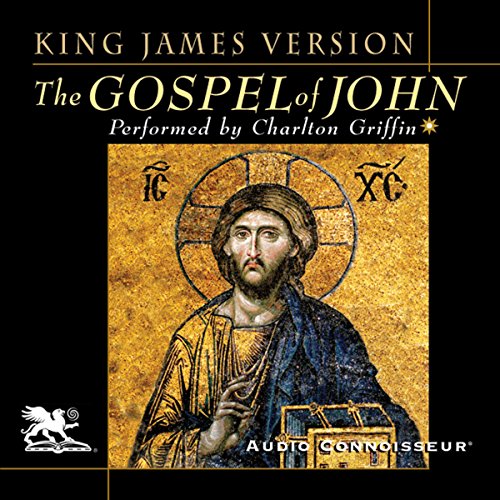 The Gospel of John

By the beginning of the second century, the author of the fourth Gospel had come to be accepted as the disciple, John, which has been the tradition ever since. However, revisions and additions to the text took place over a period of at least 50 years by three separate authors until the text came to reside in its present-day form in about A.D. 95. The author is self-identified near the end of the book as "the disciple whom Jesus loved".

What made the experience of listening to The Gospel of John the most enjoyable?

What was one of the most memorable moments of The Gospel of John?

"In the beginning was the word!"

No, I've been listening a chapter at a time.

I downloaded “The Gospel of John” from audible.com a few days ago. Charlton Griffen performs (and I do mean performs) the great story, reading the Gospel aloud. I am so accustomed to hearing the Gospels read in a perfunctory, droning manner in church. The stories take on an entirely different character when they benefit from dramatic performance.

“In the beginning was the word,” is Charlton’s opening line… intoned with Shakespearian thunder.

I’m a programmer, so I think a lot about the word as the beginning of things.

“The Gospel of John” comes to me at a point in my life where I’m very receptive to hearing it again. After a long life, I’m circling back to the beginning, trying to understand once again why I believe in and honor God the Father. Not just in a pro forma sense, but with true understanding of His nature.

Dramatic reading dramatically changes the story of Christ. Griffen makes the story feel as if it is happening in the present, that it is happening to people just like me and you… struggling, confused mortals. The story of Christ has survived for thousands of years because it tells a basic truth about human experience. We are mortal. We do not want to die. We suffer. We want God to give us hope that our suffering will be redeemed.

Griffen’s performance of the Gospel will change the way you perceive this story.

Griffin's narration of the Gospel of John captures the deep spiritual significance of this most loved books.

Thanks one an all.

I am extatiate on Mr. Griffins' voice, and how slow he goes. I like to chew on the Word of God, not just hear it whizz by my head. Thank you again.

This is the most epic, most worthy, most important, most satisfying, most beautiful story ever told.

The Perfect Reader For The Ultimate Book

I really think Charlton Griffin is the perfect reader of The Gospel According To St. John. And bear solemnly in mind that you are accountable to your creator, and in dire, desperate need of Jesus Christ. The gospel is that Jesus Christ God in person, have precisely done this: Come to to you, whoever, wherever, whenever you you are, and have performed, carried out to the full, and accomplished your eternal salvation. Trust in the words you will find within this book.