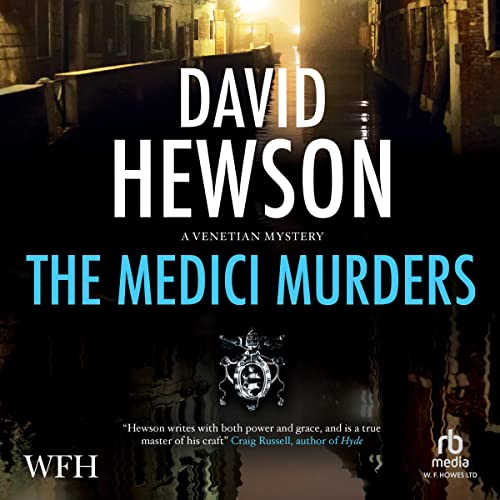 When a well-known British TV historian, Marmaduke Godolphin, is found murdered in the canals of Venice during carnival, stabbed by a stiletto blade, the Venetian police are eager to have the case solved and cleared up within a day—murder is bad for tourism!

The police recruit the help of retired archivist, Arnold Clover. Godolphin had hired his services on arriving in Venice to help sort through some historical papers of note. These dusty documents may contain previously unknown information about the assassination of the murderer, Lorenzino de' Medici, 500 years previously.

How coincidental that Godolphin meets his death in the same place as the Medici murderer, Lorenzino, on a cold, dark, bloody night. Can Arnold use his powers of perception to establish a link and solve the murder of Godolphin?

What listeners say about The Medici Murders

The narration was great, but the story was disappointing. It was boring and unnecessarily complex and contrived, possibly to make up for the lack of a compelling plot. The motive was weak and unconvincing. There was no satisfying payoff at the end. It was not worth the time spent listening.

I really enjoyed this story. I could picture Venice. The story had a lot of twists and turns, and am expected ending. Loved the tie back to historical accounts of the Medici family.

With the beautiful imagery written by David Hewson, I could see, feel and taste Venice. Include a murder with so many twists and you have an incredible listening experience. The narration by Richard Armitage was brilliant.

Slow start, but builds nicely to the conclusion of a very believable complex mystery. Location details and lifestyles just a touch overdone. But overall, very enjoyable.

The combination of current people mixed with history is well worth the listen! Richard Armitage has narrated other works by David Hewson. but this one is different all the way round. Well done!

I think this might be my favorite David Hewson book to date. It's really amazing and the details make you feel you are right there, walking the streets of Venice and I can almost smell the amazing food described. The story is interesting on so many levels and the characters bring such life and diversity, expertly narrated by the brilliant Richard Armitage. It's such a wild ride and every time I thought I had it figured out, there was another twist and it had my attention until the very last word. I can't wait to read more about Mr. Clover's adventures in Venice and I was deeply touched by his relationship with his late wife.

I loved the setting…I loved the characters…I loved the flawless narration by Richard Armitage….such an interesting plot line…history to explore…can’t wait for more!

The reader is impeccable as always, one of my favorites. I loved the historical fantasy, but most of all the real tidbits about Venice. The mystery itself is a good yarn, although not mind boggling. The Capitano is a most delightful character.

The book was detailed but it paints Venice beautifully.

I’ve been to Venice several times but my most memorable was during Carnival.

Venice after most of the day tourists are gone can make one feel like one is in a parallel universe walking around at night. It’s hard to explain but as the main character describes the contradictions between history and present day along with the cultural differences and the fascination with the past is such a part of Venice as described.

It mentally was like listening to a foreign film with subtitles for me with the ability to rewind when needed.

I enjoyed the twists and the development of the characters with what made them tick.

Of course Armitage did an incredible job in his narration which one can always count on.

I thoroughly enjoyed the historical and geographical detail of Venice in this novel, which to me grounded the whole thing and made it a better quality of crime fiction novel than is often the case. That academic approach might not be to every taste, but it was certainly to mine. It was relevant to the main, very interesting characters, and was crucial to the plot, which has some very nice twists too. Foodies will enjoy all the descriptions of meals and local produce as well!
It being read by Richard Armitage, excellently as always, (and with some gorgeous accents,) made it a perfect listen for me.

Disappointed with story, nothing exciting like previous books
Kept on waiting, waiting & waiting
More like a stroll around Venice

A different kind of book from Hewson, written with gentle pace and intrigue (dotted with some fabulous foodie moments!) David please can we have a second Clover novel.

I want to go Venice now

Fascinating story, brilliantly narrated by Richard Armitage.
I had to stop listening occasionally and go and have a look at some pictures and a map of Venice, having never been there!

An excellent well researched read. The main characters I hope will continue to be part of a series, they are so well formed and believable. The story was a real page turner as the plot developed. I know Venice well and enjoyed looking up locations used. The narrator Richard Armitage was a very good choice fitting in with the character of Arnold Clover. I would highly recommend!

Enjoyed the food and the imagery of Venice. But utterly terrible sound editing. You could hear each time a recording session ended and started. Destroyed the flow and enjoyment of the book. No idea how any publisher signed off on this. Real shame.

I cannot fault the authors use of words and his knowledge of an excellent vocabulary but this was wasted on what I can only describe as a tedious narrative. I honestly tried to stay the course in the vain hope that something might happen to ignite my full attention but had to give up less than halfway through and skip to the last hour.... and that was mostly due to my love of listening to the wonderful Richards dulcet tones and my need to discover just who had murdered the scurrilous villain of the piece. Actually, the denouement was revealing but could have happened 4 or so hours earlier and saved me the problem of wading through all that 'fluff'! Doubt that I will listen to this author again but readily admit to my admiration for his use of the English language.

I have not met this author before but was hooked from the start. As someone who also chose to live in a different country, Poland, I recognise the authenticity of the description of the experience. The Reader was excellent and had none of the ugly mispronounced words some of the readers, particularly some of the American ones, interject . I can really recommend this book.

Loved it - this will not disappoint.

Absolutely brilliant. A must-listen and Richard Armitage’s vocal abilities excel once again. He is my favourite narrator.

A Death in Venice. Excellent

I listened to this story in several long chunks and enjoyed every minute of it. Great historical details, an interesting plot and very skilled narration. The murder happens fairly early on in the story and the author does well to keep the investigative narrative going for so long. The final denouement took me by surprise and I certainly didn't see it coming!

Great story from beginning to end
Loved every minute, seems I missed to much of Venice ! had me reaching for Goggle Maps so that I could follow the story through the streets.
Richard Armitage is wonderful to listen too.