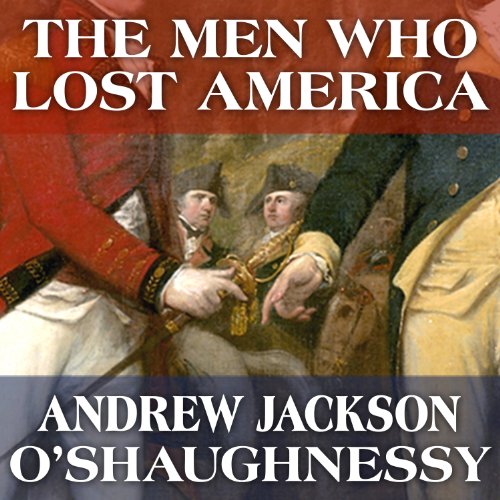 The loss of America was a stunning and unexpected defeat for the powerful British Empire. Common wisdom has held that incompetent military commanders and political leaders in Britain must have been to blame, but were they? This intriguing audiobook makes a different argument. Weaving together the personal stories of 10 prominent men who directed the British dimension of the war, historian Andrew O'Shaughnessy dispels the incompetence myth and uncovers the real reasons that rebellious colonials were able to achieve their surprising victory.

In interlinked biographical chapters, the author follows the course of the war from the perspectives of King George III, Prime Minister Lord North, military leaders including General Burgoyne, the Earl of Sandwich, and others who, for the most part, led ably and even brilliantly. Victories were frequent, and in fact the British conquered every American city at some stage of the Revolutionary War. Yet roiling political complexities at home, combined with the fervency of the fighting Americans, proved fatal to the British war effort. The audiobook concludes with a penetrating assessment of the years after Yorktown, when the British achieved victories against the French and Spanish, thereby keeping intact what remained of the British Empire.

"[An] engaging study . . . based on an extensive reading of the vast literature and of many original sources." (Brendan Simms, The Wall Street Journal)

What listeners say about The Men Who Lost America: British Leadership, the American Revolution and the Fate of the Empire

It didn't lose me

What did you love best about The Men Who Lost America: British Leadership, the American Revolution and the Fate of the Empire?

Excellent story that was well researched, performed, and organized.

Which character – as performed by Gildart Jackson – was your favorite?

Most of them come off as sympathetic, though Lord North was especially so. When taunted by an opposition member with North's habit of sleeping in the House, “Even now, in the midst of these perils, the noble lord is asleep,” North replied, “I wish to God I were,”.

Moved to know as a longtime American History buff there is still plenty to learn.

Probably one of the best audiobooks I have ever read.

The book was detailed but not too much detail. It had enough backstory to inform and explain the historical incidents while also maintaining interest. The narrator was excellent. The book met and exceeded my expectations and I would highly recommend it.

It’s surprising to learn the other sides story. An awareness dawns as the narrator makes clear that the Revolutionary War was not so much won by those fighting for independence as it was lost by Britain. The divided parliament and Britain’s wars with France, Spain, Holland and others prevented Britain from a full occupation of the Americas.
Our side of history, taught in schools, should, if it does not, include the British limitations of overcoming the revolt.
The last chapter of the book could be heard as an introduction or preface.
Thanks to the authors for a well told history lesson.
I’ve enjoyed numerous books on Audible, yet, this is my first written comment.
Perhaps the pandemic crisis, at age 81, has made me a better person!

Well-written, well-read and I learned a great deal

If you could sum up The Men Who Lost America: British Leadership, the American Revolution and the Fate of the Empire in three words, what would they be?

For all you know about the American revolution, you probably don't know much about it from the British point of view. Barbara Tuchman addressed it in The March of Folly, but not in this level of detail. It's a long time since I read a book from which I learned so much about a subject I thought I knew well.

Excellent performance. Dignified tone of voice. And it's silly, but he gets credibility points for having a British accent.

I think the conclusion lets George III off a bit easy. The impression I get from the book overall is that, at the onset, the notion that suppressing the rebellion would be easy was widespread. Before too long, many realized the significant problems with the war. Only few refused to face the truth, but one of them was King George. If he had seen sense earlier it would have been much better for the empire. I don't recall the author singling out George in the conclusion.

Played at 1.25. I have read many books about the revolution. This well written book provides a fuller perspective of the period and the war. An excellent rounding out for any student of the American Revolution

I enjoy history, religion, and a bit fiction. This book is informative and easy to listen to.

Interesting, but more a series of biographies

What did you love best about The Men Who Lost America: British Leadership, the American Revolution and the Fate of the Empire?

You are presented with a cavalcade of characters, starting with King George, Cornwallis, Burgoyne, etc., who led the British efforts during the American Revolution. It's very easy to jump for character to character as the features are self-contained and presented essentially from the start of the revolution (earlier if cogent) thru their deaths.

What other book might you compare The Men Who Lost America: British Leadership, the American Revolution and the Fate of the Empire to and why?

He provides an engaging narration, slipping into French where needed effortlessly and the British accent seemed to be almost obligatory for a book like this!

It's almost like a reference book or a "Biography Channel" for the British cast of characters for the American Revolution.

I was expecting something very different but I'm not disappointed at all. As the author lays out in the initial chapters, British knowledge of many of these individuals is limited -- I knew very little of the naval leaders, or some of the more scandalous affairs of these individuals during the Caribbean battles between France, Spain, and Britain during the war.

Pay Attention or You're a Goner

I first became aware of, and interested in, this book after hearing a podcast of Mr O'Shaughnessy speak to the Virginia Historical Society, which was quite good. I hurried to purchase the book which, at 21 hours in length AND featuring George Washington in a starring role, was right down my alley.

I admit that I was riveted, or should I say, could have been riveted, by the story, had it been in a different format. The author chose to write it in acts, for lack of a better description. So we were always back and forth with 4 and and 2 and..., which was very distracting. We were talking about North and then Germaine and then suddenly, we were back at North. I was constantly saying, "wait... what?" I got lost very quickly and unless you pay close attention, so will you.

That nik-pickery aside, who knew? Fascinating. The loss of America was completely unexpected and as an American, I am again amazed at the incredible victory which laid the bounty of America at our feet.

A valuable perspective not normally taught in US

Would you consider the audio edition of The Men Who Lost America: British Leadership, the American Revolution and the Fate of the Empire to be better than the print version?

No opinion, I don't have the print version. Illustrations and portraiture would add value if available in print.

What was one of the most memorable moments of The Men Who Lost America: British Leadership, the American Revolution and the Fate of the Empire?

As this work studies eight very different personalities and their respective circumstances, there was no particular event that stood out from the rest. I found all the case studies captivating.

Look across the sea

Good write up across the sea, and how the British Royalty lost the American Revolution.

Too often we hear the US view of the Revolution. This is the view from across the Atlantic. What is stunning is the direct comparison one can make of the US involvement in Vietnam and Washingtons Fabius to Cornwallis' Hannibal. The politics of France and GB was absolutely crucial to the war as well as French / German help which is usually skipped over. Great story. The US is not just Washington