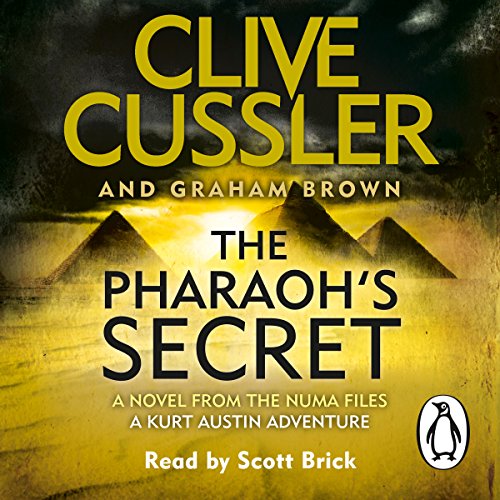 Buried deep beneath the Sahara desert is a secret - an ancient elixir so powerful that it is rumoured to take life from the living and restore it to the dead.

Off a remote island, a mysterious ship releases a deadly poison. Minutes later everyone on the island is dead. Responding to a distress call, Kurt Austin and the NUMA team struggle to understand what has caused this disaster. As they investigate the incident further, they uncover a far greater threat.

What is the truth behind the legends?

Now Kurt Austin must learn the secrets of the past if he is to save millions from horrifying deaths. But it is a desperate race against time. And he faces a deadly enemy who will stop at nothing....

What listeners say about The Pharaoh's Secret

not one of his best

It was ok but not one of his best.
Good characters as always, I just didnt get as emersed in the story as I usually do.

As I get older I treat these like boys own stories , macho heroes and an impossibly survived storyline.
Great way to pass away hours while recovering from illness.

Another Great from Clive and Graham

One of the few books I have listened to recently that I just had to keep listening no matter where I went. Gripping and adventurous with a few funny moments. I love the characters and the
adventures they go through. Thanks for another great story.

A well paced expertly read book. Could not put it down. A fantastic story from start to finish.

Great adventure and interaction between actors. Story line is good and keeps you wanting to keep reading on .

Listened to this whilst on holiday as watching the kids around the pol and reading a Cussler book isn't really an option! Scott Brick delivered another superb performance backed up with Cussler's awesome ability to spin a superb yarn based on current (sic) Middle Eastern sentiment. I thorough enjoyed it especially the attention to detail. And nine of the kids drowned! Not mine anyway.

Clive Cussler does it again

loved it. A good action adventure to get lost in. I would recommend this audio book to all.

I just love the tone of the narrator, he is able to take you on the journey. Capturing every moment

Scott Brick is an outstanding narrator, though I enjoyed his narration of Terry Brooks much better, maybe because he is a better writer. Clive Cussler's style and delivery is increasingly becoming stale and boring.

what an awesome story, highly recommended, action drama and history all packed into one. well worth the purchase. thank you very much