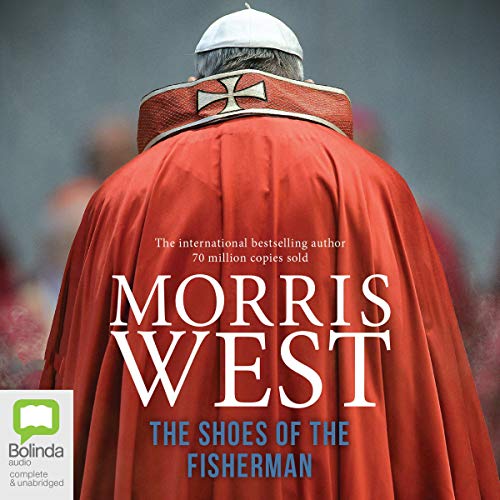 The Shoes of the Fisherman

This is the story of Kiril Lakota, a cardinal who reluctantly steps out from behind the Iron Curtain to lead the Catholic Church and to grapple with the many issues facing the contemporary world.

The pope is dead, and the corridors of the Vatican hum with intrigue as cardinals gather to elect his successor. The result is a surprise: the new pope is the youngest of them all - a bearded Ukrainian.

The Shoes of the Fisherman is the moving story of Kiril I, recently released from 17 years in Siberian labour camps and haunted by his past. Not only is he the leader of a fractured Catholic Church, but he also finds he must confront his inquisitor and tormentor in order to avert another world war.

An international best seller, The Shoes of the Fisherman is one of the great novels of the 20th century and is still widely popular today. It is the first novel in Morris West's Vatican trilogy.

What listeners say about The Shoes of the Fisherman

Very good book for a Catholic

I found this book very boring and not interesting at all. I could not finish it.

Fortunate that time and circumstances allow...The Shoes of The Fisherman...I Recommend Repeating the following as Required .. Return.. Reread.."Though weary of mind and weak of flesh.. Often... "Return...to...Immerse ... Refresh"... Return to Self ..Return to ONE.. Rejuvenated...Gracious... "Knowingly Blessed"..

Too boring to be bothered with

This book may possibly interest someone who is fascinated by the Catholic religion and its practices. Otherwise, a complete bore and not worthwhile listening to.

I have owned a copy of this book since it first came out. I was unable to read it because of my unhappy dealings with the church.
Morris West has given me a completely different perspective from which to view the rigid Catholicism that so damaged my family during my early years.
What this author has achieved for me by reinventing the ideal Pope & what his holy office could be in practice. Hopefully one day such a thing is always a possibility
This is a classic book worthy of it's place in literature. I have always respected Morris Wests background & his life's work. He was a great author.
The narration was really excellent & married up perfectly with the content read. I much appreciated the well drawn characters brought to life through an accomplished actors skilled craftsmanship & perfect timing.
I highly recommend this book. It explains much of the formalities of ecclesiastical life & the heirachies that mould it.
This is an insider's view & shed much light on the complex structure without judging or excusing it.
I am happy to say it helped me find understanding & softened my heart towards pope's. Don't worry it won't convert you. lol.