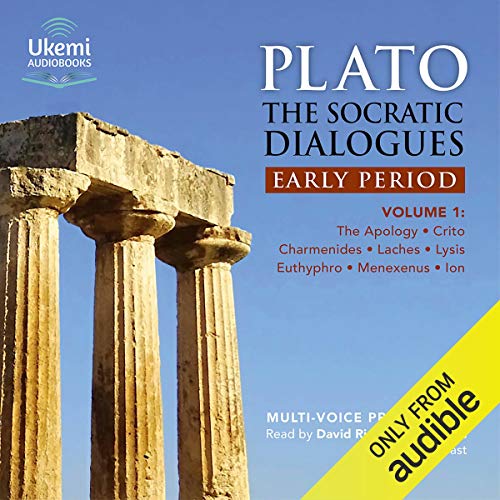 Here are the Socratic Dialogues presented as Plato designed them to be - living discussions between friends and protagonists, with the personality of Socrates himself coming alive as he deals with a host of subjects, from justice and inspiration to courage, poetry and the gods.

Plato's Socratic Dialogues provide a bedrock for classical Western philosophy. For centuries they have been read, studied and discussed via the flat pages of books, but the ideal medium for them is the spoken word. Some are genuine dialogues while some are dialogues reported by a narrator supposedly at a later date.

Ukemi Audiobooks presents all of the Socratic Dialogues in a series of recordings divided into Early Period (Volumes 1 & 2), Middle Period (Volumes 1 & 2) and Late Period (Volume 1) - based on their likely composition by Plato. This opening volume starts with perhaps the most famous speech, The Apology, Socrates' doomed defence against the charge of heresy and corrupting the young. It is followed by Crito, in which Socrates' friend offers to spirit him out of Athens to avoid execution. Among the others are discussions on Courage (Laches), and Friendship (Lysis).

The role of Socrates is taken by David Rintoul, a widely admired and experienced audiobook reader who studied philosophy at university before taking a different path to RADA, TV, theatre and film. He is joined by a broad range of readers, most known to Audible listeners. Each Dialogue is prefaced with a short introduction to set the scene for newcomers to Plato.

Stimulating, insightful, entertaining, fun. For goodness sakes it’s Socrates. What else could it be. Using Jowett’s translation. The performers are excellent and enrich the reading of the dialogues.

This is a first class rendering of the socratic dialogues...Ukemi produces very fine audiobooks and i always keep an eye on their catalogue...

I really enjoyed it...

All of Plato is excellent and instruction

I enjoyed immensely all of these dialogues translated by Benjamin Jowett and performed superlatively by David Rintoul. Very highly recommended for those who seek an existential edification and a philosophic understanding of Ancient Greece as exemplified by the insightful writings of Plato in the character of Socrates his great teacher. Socrates said true wisdom is knowing that you don’t know. Find out what you don’t know by self and other examination! Rintoul’s performance in the character of Socrates is sheer brilliance, along with a great cast of supportive actors. Each Dialogue is briefly introduced with the characters and setting that are involved. I’m on to the next set of Dialogues in the order that they were supposedly written. The works of Plato, along with Shakespeare and Dostoevsky are my three books that I would take with me on a stranded desert island.

A masterful recording brings Plato back to life

As a fan of Plato, I had been searching for a complete set of the Socratic Dialogues, so I was very excited when I saw Ukemi recordings. I was even happier when I found out that Nicolas Soames, the founder of Ukemi, was previously in charge of Naxos Audiobooks and had produced many of my favourite classics. As for the production, it is well done and the actors give you a clear sense that they actually understand the ideas Plato was trying to convey: the pursuit of truth through questions, answers, and more questions. To me the attribute of actor-understanding is essential to enjoying any philosophical work in audible format and particularly with dialogues like these. In this case you feel as if you are in the room, experiencing the tension, with convincing protagonists attacking and defending competing theories of truth, virtue, and the good life. This is a very effective (and enjoyable) path to Plato. I'm currently on Volume 3 but I will definitely be buying the rest as soon as they are released. Top marks so far!

Very accessible introduction to the Socratic dialogues. Well read by the whole range of characters.