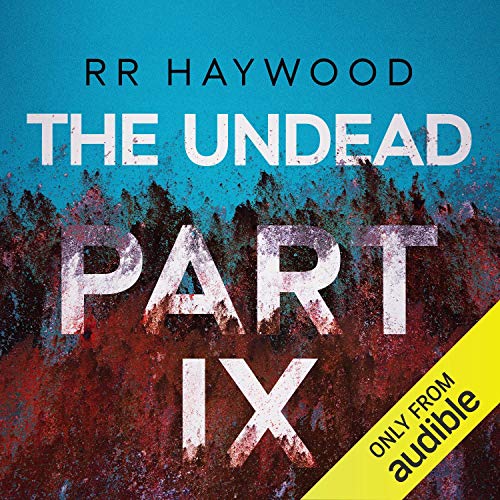 Dave finds an unconscious Howie and carries him into the residential streets for safety. The others have been separated and are searching for each other. Nick falls asleep and misses the pick up.

We meet Lilly and Billy, a brother and sister who are led by their ineffectual father into a series of devastating situations which results in Billy being taken by two men and Lilly witnessing the murder of her father. Lilly tracks her brother and meets up with Nick who, not being able to find his group, agrees to help her.

Nick finds Billy has been taken to a stately home taken over by a doctor who claims to be working on a cure. Meanwhile, Howie, who has learned he is immune, and his group are heading back to the fort when they become trapped in a safari park.

What listeners say about The Undead

just gets better and better

Hope this series goes on forever. wonderful characters,wonderful reader. if you like the genre you will not be disappointed.

Anyone else catch all the rape fantasy and underage girl stuff going on in this book? I think this guy might be a bit of a nasty bastid. I mean seriously, I'll bet 2 hours of this was talking about how one or the other characters wanted to have sex with a 15 year old girl. It wasn't his best work that's for sure.

running out of ideas

I'm totally hooked on this series and I really like it, but book 9 was lacking. half the book was spent chasing a little girl and when they finally caught her it was just a hyper kid that talked a lot and nothing happened then the book ended. not really looking forward to them being chased by lions(that's where they left off ). seems a bit ridiculous and the author is just looking for weird ideas. I sure hope he gets back on track and keeps the series moving because if I have to keep paying for this type of goofy stuff I'll stop buying.

This series was one of my first audio experiences and I loved them. The characters are well developed and you can just see them in action.

only one that's lulled so far

if you can suffer through the first few chapters then this book, like most of the other undead books, turns out fairly well

I am really enjoying this series, but they are way too short. Juzt as the story is getting good, it's the end!

Such a great story! I can't wait for the next one! Brilliant writing and a talented narrator. I am drawn in and don't want to stop listening. Please keep these books coming, Audible!

I don't know what to do now. Should I wait for part 10 to come out in Audible or go on to read the Kindle version? I miss Howie and the Living Army already. What to do?

If you like zombies and a story with a great mix of gore, tragedy, and comedy, this series is for you. If you enjoy narrators who can make the characters come alive, Dan Morgan is excellent. This book will have you looking forward to your morning commute.

The Undead series is “The Shit”

Love this story! RR Haywood is amazing! Dan Morgan is the best with his narration’s love love love the accents and the vast array of personalities!!

RR Haywood is a masterful writer!! The character development, the story line, the way its all tied together is absolutely delightful. You end up being emotionally invested in almost all of the characters. Im just now starting Book 10. What a fun ride!!

That even though hes writing about an apocalyptic world, its not bleak, even if some scenes are.

What was one of the most memorable moments of The Undead?

Nick comes into this own in this one, we get to explore more what makes him tick.

Yeah the moment where Nick makes up his mind whos lying based on his training from Dave, i could listen to that section over and over.

An excellent addition to the series

What other book might you compare The Undead to, and why?

Arisen series both as good as each other

Since the last one yes

I think I'm secretly in love with Nick!
Awwww bless!
Another great episode, new characters but kept a high pace throughout! Some more laugh out loud conversations, and some parts that make you think!
Look forward to the next....

the story we all love. characters are extremely well written, story is excellent and the narrator is first class. only one day to wait for day ten!

Best of the series so far

I've loved all of the Undead books, but for me this is by far the best. I love that the whole group are separated, it leads to some fantastic scenes with Dave at his best - with Howie. The entire Fruit Pastille conversation, and the ferret conversation absolutely killed me! Their dynamic is the best thing about this series, and them being alone together means they're at their best.

Dan Morgan once again does a brilliant job narrating the characters, I'm going to miss him in a couple of books time, but understand why he left and am intrigued to see what Joe Jameson will bring. For now though, he's still absolutely killing it, as is (as usual) R.R. Haywood! Can't wait for the next installment!

I am aware I am near the end of the line for this narrator, he has done a great job from books 1-10 (I think that’s his last)
Completely understandable why he was no longer comfortable with narrating this series as it does take a darker turn in part 9.

Please do not listen to this if you are triggered by things relating to sexual assault. Was a hard listen but I also understand the authors point of view of showing the breakdown of society and reality of the ugliness of human behaviour.

That aside - The ending of this book instantly made me purchase a new credit to continue with book 10. So so good!

bit disappointing tbh! Very graphic violent sexual content and a lot of running around! It's not on par with RR haywoods other series/novels if I'm being honest.... but yet I still want to find out what happens next.... I guess thats the tell of a good author.... Good beginning, mediocre middle and an intriguing end that makes you want to know what happens next!

To be honest, I'm struggling with this now. I think I'm just completely zombied out and doubt I'll finish this book. I've enjoyed RR Haywood, the Extraction series, Town Called Discovery, (which seemed to be a book made up from the debris off the Extracted cutting room floor) still enjoyed it and The Undead, up until now

I've gotten so invested in all of the characters, onto the next book, even though its my 5th time around listening to the series and no doubt wont be my last!!

Way way to short ro be honest. and to split it into two parts was crap