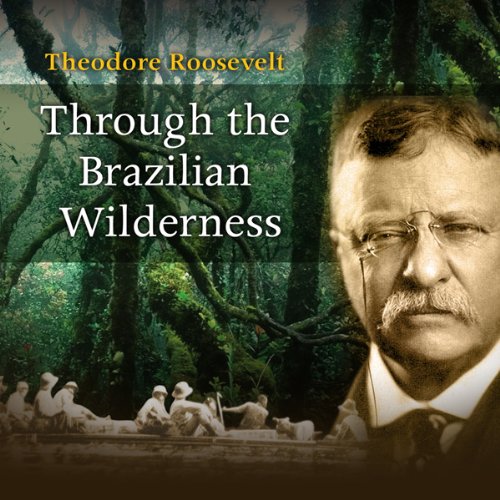 Through the Brazilian Wilderness

A former American president nearly dies during an ill-planned exploration through the Brazilian Wilderness and down the River of Doubt. Theodore Roosevelt was a naturalist, explorer, author, hunter, governor, soldier and 26th President of the United States. In 1913, he joined with Brazilian explorer Candido Rondon to explore portions of Brazil and to bring back animal specimens for the American Museum of Natural History.

In this first person narrative, never before recorded as an audio book, President Theodore Roosevelt describes his expedition along rivers, which are home to deadly Piranha fish, through almost impenetrable forests filled with insects, snakes and wild animals. Roosevelt witnesses primitive Indian tribes, wary of strangers and a murder among his increasingly desperate men, before he is nearly defeated by the River of Doubt.

What listeners say about Through the Brazilian Wilderness

Listened to this on Librivox until the heavy accent of the narrator got in the way. Sadly this Audbile reader interprets the protagonist of a serious and often painful story as a daft Teddy Roosevelt recalling his adventures to a 2 year old. Add to this the inappropriate background sounds (think monkeys and native drumbeats) and the result is a bizarre listening experience that is probably better suited to a story of Willford Brimley on a tube trip.

Books by this reader should be replaced.

Terrible performance of a great book. Deleted from device and from library. Can not stand his whiney voice.

Roosevelt's awe in reaction to the Brazilian wilderness and the enormity of their undertaking are great reading. The narrator also sounds like a breathlessly cheerful Wizard of Oz: utterly mismatched with Roosevelt's gravitas.

Where does Through the Brazilian Wilderness rank among all the audiobooks you’ve listened to so far?

Which character – as performed by Andre Stojka – was your favorite?

Must be under influence of stimulants

The narrator's style is frustrating and he speaks so fast it's as if he doesn't understand commas and is high on cocaine.

So close to turning it off

I’ll admit to only being about ten percent through this, but if the subject matter wasn’t interesting there would be no more listening for me. The narration is horrible. The speaker delivers every sentence with the giddy enthusiasm of an over-eager hired actor reading ‘Twas the Night Before Christmas to a room of four year olds. He interjects laugh-talking where I presume he presumes Roosevelt was chuckling as he wrote. He mispronounces words such as ornithology (“or-IN-thology”) and foliage (“folage”) with regularity. And now I feel bad, because he just has the sound of someone who’s a very nice person. He would make a great kids’ book narrator, but a daunting Amazonian trek is not something he should verbally venture into. The content is actually very interesting, although I was a bit amused, if that’s the right word, when Roosevelt spoke nobly of protecting the wild in one passage and in the next is mentioning all the animals he is shooting for no other reason than to shoot and leave them. But his descriptions of the adventure and his ability to relate events, objects and aspects of nature in colorful detail are wonderful, and the overall subject is gripping.

Through the Brazilian Wilderness

Wonderful read. Enjoyed it thoroughly. Narration also was quite good. I also enjoyed the updated information at the end. Good job,

What disappointed you about Through the Brazilian Wilderness?

The narration is a bit too fast. Either the script the narrator read from was not punctuated or he completely missed the periods and commas. I changed the play speed to 0.75 but that didn't help as it sounds like there is an echo in the playback.

Slow the narration down. Take a breath between sentences. It sounds as if the paragraphs are simply run-on sentences.

What character would you cut from Through the Brazilian Wilderness?

I'm sure the book itself is great, but Andre Stojka ruined it for me.