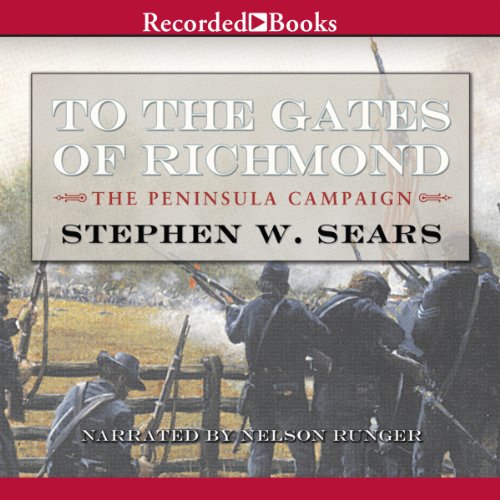 To the Gates of Richmond

It was the largest campaign ever attempted in the Civil War: the Peninsula campaign of 1862. General George McClellan planned to advance from Yorktown up the Virginia Peninsula and destroy the Rebel army in its own capital. But with Robert E. Lee delivering blows to the Union army, McClellan’s plan fell through at the gates of Richmond. Now, in a study of the great Civil War engagement that weaves together narrative, military analysis, and eyewitness accounts drawn from the diaries and letters of soldiers, historian Stephen W. Sears showcases all the reasons why Ken Burns, the producer of the PBS series The Civil War, calls Sears “one of our best Civil War historians.”

The recording has high production values, an understandable pace, and a good narrator. This is a part of the Civil War that I find fascinating- before either army really gets its act together and figures out how to coordinate the movement of seventy thousand or a hundred thousand soldiers. Sears is particularly effective in chronicling McClellan's deteriorating state of mind and its brutal effects on the Army of the Potomac. But nobody really shines in this chronicle- even Lee, who had not yet developed his style of command to an effective level.

One of the best

The way author brings the individuals involved to life, so that the outcomes are seen as uncertain, always influenced by character and small decisions that turn entire battles. The author describes geography well enough so that a lack of visual aids (maps) is not crippling to the listen. The book also beautifully ties together single events to the broad flow of the unfolding war; like the confrontation by the ironclads Monitor and Virginia threatening the entire campaign at it's beginning.

Author is able to bring to life the personalities of the various commanders. For example, the amateur thespian, Confederate Gen. Jeb Macgruder is able to delay the approach of the ever-cautious McClellan, by staging small groups of soldiers with lots of flags and drums marching back and forth between the James and York Rivers just barely in view of the enemy, convincing McClellan and his dysfunctional intelligence chief, Allen Pinkerton (Pinkerton detective Agency), that an enormous Confederate Army was maneuvering just out of sight, preparing to pounce on the Federals. In fact, Macgruder commanded about 5,000 men to McClellan's 90,000. Macgruder succeeded in stalling (almost entirely by ruse and display) the Federal advance nearly 3 months, long enough to permit Confederate Gen. Johnston to gather a sizable force to defend Richmond. I found myself compelled to go visit some of the battlegrounds around Richmond, and see the terrain in a new light. It's made me want to know more of the politics of the Federals and Lincoln's White House in particular.

What does Nelson Runger bring to the story that you wouldn’t experience if you just read the book?

Solid narration without either theatrics or boredom.

At the end of the book, the author begins naming battle forces by their commander's name, expecting the reader to know them as Union or Confederate; this is a bit of a strain on the listener.

an excellent book to read. my knowledge on the 7 days battle was forever deepened

Felt like being a eyewitness to the actual battle

One quiet day I sat in a reclining chair with a cup of coffee and begin listening to this book and soon found myself transported to being a spectator and even some sense A participant in the Battle. The detail, first person narrative at times, flowing description, from one phase of the battle to the next enthralled me. I greatly enjoy Stephen sears is near to skill, Nelson Runger’s Voice, and a felt sense of personal connection to the American Civil War. Stephen sears is Gettysburg and the peninsula campaign, Bruce Catton read by Nelson Runger also deserve the highest appreciation for a listening experience that surpasses 99% of what’s on TV. I am in Audible junkie and love audible product. I’m sure I have over 200 books on audio because I get a form of pleasure and enjoyment in meaning from this experience that I can’t find anywhere else. I particularly enjoy listening when I’m on a long drive and all lonely highway with a little traffic.

Good, readable military history for anyone with an interest. Serious students will need to look to more detailed battle histories.