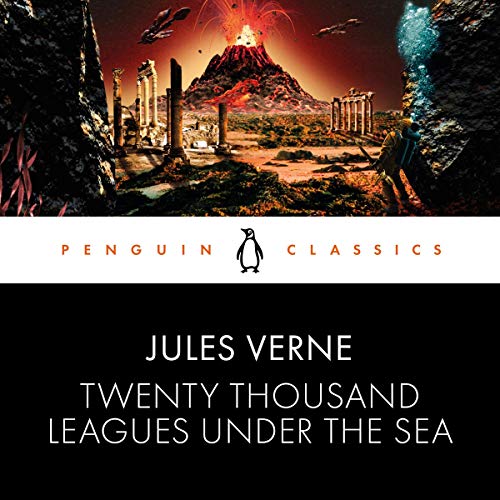 Twenty Thousand Leagues Under the Sea

This Penguin Classic is performed by Tony Law, the award-winning comedian and actor who is best known for his surreal stand-up routines and flights of fancy. This definitive recording includes an introduction by David Coward, also read by Tony Law.

In this thrilling adventure tale, three men embark on an epic journey under the sea with the mysterious Captain Nemo aboard his submarine, the Nautilus. Over the course of their fantastical voyage, they encounter the lost city of Atlantis, the South Pole and the corals of the Red Sea, and must battle countless adversaries, both human and monstrous. This new version by acclaimed translator David Coward brings Verne's novel vividly to life for a new generation of listeners.

What listeners say about Twenty Thousand Leagues Under the Sea

Tony Law, a Canadian stand-up comedian, is an unusual choice for narrator of Jules Verne’s masterpiece, but he pulls it off. The only evidence of his day job I could find is the somewhat unusual voice he uses for the servant Conseil. But this is a perfectly straightforward forward and dramatic reading of the novel.

David Coward’s translation is one of the few accurate and complete translations available in audiobook format. When you combine that with his excellent introduction, which covers some of the obstacles placed in Verne’s path by his publisher, who insisted on a “PG rating”, this becomes, as of this moment, the audiobook of choice if you want to experience the novel in its fullest context. Get this one. Accept no substitutes.

Read by Skipper from Penguins of Madagascar

Very entertaining. It felt like I was listening to Skipper from Penguins of Madagascar. Any moment I thought he was going to call out to “Rico”. The performance was a great fit for this book. Highly recommend.

Sucker for the classics

Though many find this story to be a classic, not many people actually know what it is about. Twenty Thousand Leages Under the Sea is exceedingly educational and simple to read. Though its less thrilling or dramatic compared to a more modern book, it was made in the 1870s and contains a surpising amount of history of modern events of that time. I highly recommend giving this book a try.

The narrator kept the story alive

As a massive fan of Tony Law, it was a treat to have him read me this story, which I could never have read for myself. The book, which I have tried and failed to read on several occasions, is a long, a wordy and somewhat laborious tail, and Mr Law managed to bring it to life. Well done Audible for clever casting! I eagerly await another title narrated by him!

This is so badly narrated I will have to send it back. This is a narrator who simply cannot do accents. Goodness where Captain Nemo is supposed to be from.