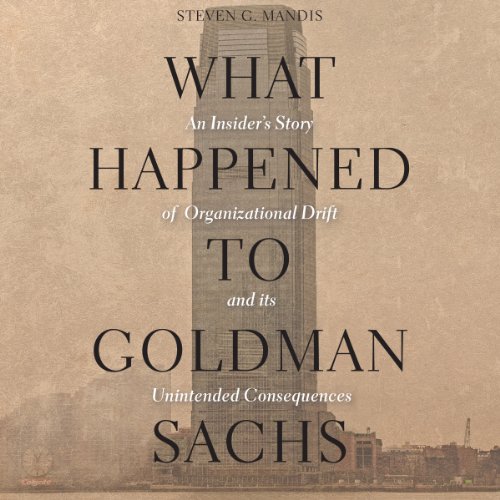 What Happened to Goldman Sachs

In What Happened to Goldman Sachs, Columbia Business School professor and former Sachs executive Steven Mandis charts the evolution of Goldman Sachs from an ethical standard to a legal one and uncovers the forces behind what he calls Goldman's "organizational drift". Drawing from his firsthand experience; sociological research; analysis of SEC, congressional, and other filings; and a wide array of interviews with former clients, detractors, and current and former partners, Mandis exposes the pressures that forced Goldman to slowly drift away from the very principles on which its reputation was built.

Combining insightful analysis with engaging storytelling, Mandis has written an insider's history that offers invaluable perspectives to business leaders interested in understanding and managing organizational drift in their own firms.

“An accessible, clearly written book. Those interested in all things Goldman will find it useful for its appendixes, which include a timeline of the bank’s history and biographical sketches of its top leaders.”
— The New York Times
“A remarkable new book.”
— The Economist
“In this riveting debut, Columbia Business School professor and former Goldman Sachs executive Mandis examines the factors that tarnished the firm’s reputation in recent years. . . . A must-read for anyone interested in the world of business and finance, history, or organizational dynamics.”
— Publishers Weekly
“Fascinating . . . for its sympathetic yet unflinching study of a firm and an industry that has come to epitomize what is problematic about Western capitalism, What Happened to Goldman Sachs is hard to beat.”
— strategy+business magazine
“entertaining and informative… a welcome addition to the literature on the rise and fall of corporations.”
— Seeking Alpha (seekingalpha.com)
“A profound tale.”
— The Financial Times
“Several authors have tackled the question of how Goldman’s culture changed post-1999 but none so deftly as Steven G. Mandis.”
— The Wall Street Journal
“Mandis’s book describes changes at the bank and across the industry that have contributed to the unflattering portrait of Wall Street that has taken hold since the financial crisis.”
— Politico (politico.com)
“A more somber, studied look at the bank’s culture. . . . His book, [ What Happened to Goldman Sachs] has the added gravitas of being the basis for Mandis’s PhD dissertation on his former employer at Columbia University.”
— Bloomberg Businessweek

What listeners say about What Happened to Goldman Sachs

Once upon a time there was a setting of relationship finance practiced between neatly stratified teams of jolly fellows (partners with skin in the game) who traded (as much as they traded financial instruments) lively ethical bon mots straight out of Horatio Alger stories around the Good Scout campfire. Each of them felt like a member of a family in their firms, and the warmed-over feelings flowed like glowing marmalade between them. There seemed never a conflict between fiduciary duties to make maximum profits for firm owners, and a willingness to endlessly bend over for counter-parties in arm's-length deals who, after all, in this wonderland of loyalty and bonhommie all around, had relationships that never ended. How wonderful it must have been to survey this landscape where resources were allocated around the richly set dinner tables without the faintest stain of actual competitive pressure. It was (the myth usually recites) that way, if not in old J.P. Morgan's day, then, post-Depression when financiers again had neat silos of privilege fenced off (this time) by New Deal regulations. WAKE-UP CALL: something called later 20th century history happened. It disrupted markets from the inside out, top to bottom, adding energy, if certain new instabilities. That fond older vision (if it existed) unraveled for everyone just like it unraveled for the dinosaurs and the endlessly well-employed horses of the 1800s. So why are we back gazing with wet eyes at this glowing postcard of a bygone day, that couldn't be reconstructed any more than the dinosaurs' habitat could be? Well, some people are just weepy-eyed sentimental. They love to recite at great length their feelings about the caring captains of industry they served with (goes the rhetoric). Oh, please. One cannot drive at full speed with eyes too exclusively and weepily on the rear view mirror. And here, the narrator has a perfect forlorn wistfulness to go with it. I'm concerned with these topics, as a teacher of ethics. I choose a different approach. And, large parts of this book for me are indistinguishable from Charles D. Ellis' earlier history of GS. It had a lot of this sort of tone too, with a bigger (if slightly earlier) historical sweep.