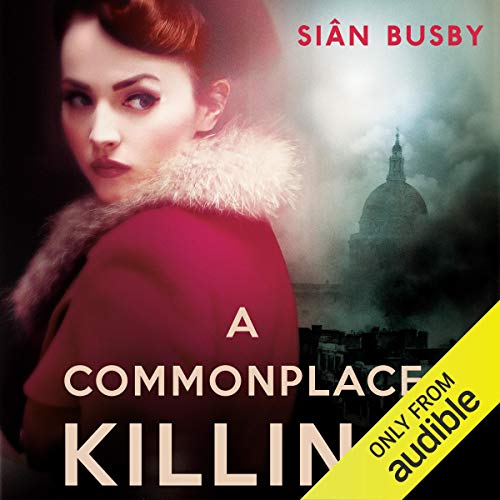 On a damp July morning in 1946, two schoolboys find a woman’s body in a bomb site in north London. The woman is identified as Lillian Frobisher, a wife and mother who lived in a war-damaged terrace a few streets away. The police assume that Lil must have been the victim of a vicious sexual assault; but the autopsy finds no evidence of rape, and Divisional Detective Inspector Jim Cooper turns his attention to her private life. How did Lil come to be in the bomb site – a well-known lovers’ haunt? If she had consensual sex, why was she strangled? Why was her husband seemingly unaware that she had failed to come home on the night she was killed?

In this gripping murder story, Siân Busby gradually peels away the veneer of stoicism and respectability to reveal the dark truths at the heart of postwar austerity Britain. Siân Busby was an award-winning writer, broadcaster and film maker. She published four books, including The Cruel Mother, a memoir of her great-grandmother which won the MIND Book Award in 2004; and a novel, McNaughten, which was published to critical acclaim in 2009. She was married to the BBC Business editor, Robert Peston, and had two sons. She died in September 2012 after a long illness and will be much missed.

"A gripping murder story in which the veneer of stoicism and respectability is gradually peeled away to reveal the dark truths at the heart of postwar British society..." (Lucy Cavendish)
"A writer with a rare and singular dedication to authenticity...the atmosphere Busby evokes is as melancholic as Graham Greene The End of the Affair." (Valerie Grove, The Times)
"Siân Busby's final novel is a classic whodunit at its very best." (The Express)
"Elegant, spell-binding and unbearably sad...This deeply heartfelt crime novel brings a tear to the eye, for it shows what a fine novelist we have lost." (Daily Mail)
"A writer of rare subtlety." (Mail on Sunday)
"The dinginess of London in 1946 is brilliantly evoked...in this distinctive and engaging novel." (The Sunday Times)
"Illuminating...A Commonplace Killing by Sian Busby is rich in detail and peopled with beautifully drawn characters." (The Telegraph)
"A cracking book." (Lorraine Kelly)
"Extraordinarily atmospheric...a superbly accomplished and gripping piece of postwar noir" (The Times

What listeners say about A Commonplace Killing

This story didn't go anywhere. There was no 'thrill' in finding out who did what. Also I found the several nasty anti-Semitic comments totally offputting - I barely bothered finishing it.

This book is beyond excellent it is a true work of literature. The bombed out landscape and the wave of crime hitting ordinary Londoners who are trying to survive as best they can on rations serve as a metaphor for mental desolation and despair. The author explores three points of view, the killer, the victim and the detective - they are all fighting inner demons and trying to work out what the point of existence really is. The prevailing cynicism is offset by the young female police officer who is looking to the future and presages a better life to come - perhaps. This is a book which really makes you think and question certainties; it is a relatively short in length but very wide in the intellectual challenge it will give you. The narrator is splendid and his voice is perfect for this tale, I cannot praise him enough. Daniel Weyman makes an extremely moving tribute to Sian Busby at the end of the book which will no doubt give you an added insight into the content of the book.

The title of this book tells it all. It isn't a modern detective story full of twists and turns. It is a beautifully crafted novel set in the 2nd world war. The description of the times and the people are well described. Well worth listening too!

Should have been better than it is.

Most of this book is very good. The depiction of post-war London is excellent and the use of different viewpoints to tell the story makes it build to the climax in a subtle and interesting way. Unfortunately the climax doesn't really arrive. Sian Busby's husband's assertion that she finished the book before she died isn't really correct. The end of the story is there, but it is very obviously unfinished.

The narrator does a great job. I will certainly be looking for more of his work.

Telling the story in the two timelines

Have you listened to any of Robert Peston and Daniel Weyman ’s other performances? How does this one compare?

I think the writer showed great promise and it is a real shame her life was cut short.

Would you try another book written by Sian Busby or narrated by Robert Peston and Daniel Weyman ?

I wouldn't read another Sian Busby book but Daniel Weyman was a good narrator.

I liked that the story was told from each character's perspective. I found the flashbacks slightly irritating.

This was a good detective story, spoiled for me by a really negative world view. I found I didn't really like the main characters. It was depressing to listen to.

If you could sum up A Commonplace Killing in three words, what would they be?

What about Robert Peston and Daniel Weyman ’s performance did you like?

In engaged me I was sad when it ended and looked immediately for the authors earlier books.

A great read, better than I imagined

Would you consider the audio edition of A Commonplace Killing to be better than the print version?

I really enjoyed that I could listen to this book whilst doing other things. Great story and narrator, if I didn't have audible, I just wouldn;t have the time to get through and finish books and this is just such easy listening.

So believable and easy to listen to

Which character – as performed by Robert Peston and Daniel Weyman – was your favourite?

There were so many it was hard to tell

go ahead and enjoy

I recommend this book as being one of the best of it's genre ... it is written with a real feel for time and place. The post war poverty and the threadbare existence of post blitz Londoners is brilliantly captured. This is noire but British through and through. An impressive work that is narrated with a depth of emotion that will take you through the darkened streets of the capital.

What was one of the most memorable moments of A Commonplace Killing?

The book abounds with clever detail. The discovery of the body on the bomb site stands out. Utterly believable. Utterly cruel.

What about Robert Peston and Daniel Weyman ’s performance did you like?

The delivery is measured and at times weary which reflects the ambiance of the story and the setting so well.

From a loveless life to a lonely death..

What disappointed you about A Commonplace Killing?

It never captured my imagination, I was constantly rewinding as I'd drifted off thinking about other stuff

What was most disappointing about Sian Busby’s story?

What story, I stopped at chapter 17

Something needed to happen to capture the readers interest sooner

This was very evocative and atmospheric and was well read. I particularly liked the approach of switching perspectives between the diffferent characters.