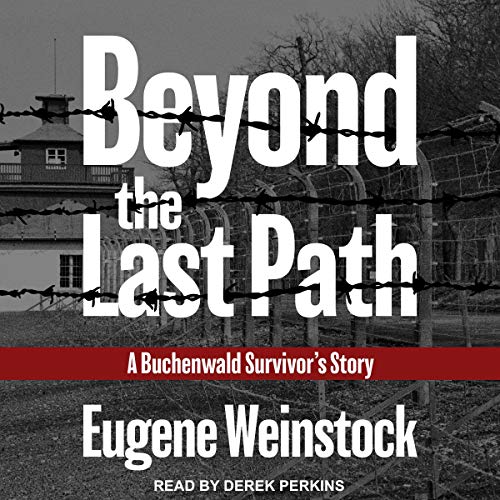 Beyond the Last Path

This is the story of No. 22483, who had been shipped from Belgium to Buchenwald.

It records what he saw and felt during his calvary from Antwerp to the Malin distribution camp in France and from there to the extermination camp of Buchenwald. He was one of the few people who both entered a Nazi concentration camp and left again. This is his remarkable personal story that records his experiences of one of the most harrowing events in human history.

Buchenwald concentration camp was one of the first and largest camps to be built on German soil and during the years that Weinstock spent there he kept company with other Jews, Poles, Slavs, political prisoners, and many other men and women that the Nazis deemed subhuman.

Eugene Weinstock was a Hungarian Jew who was living in Belgium at the beginning of the Second World War. Beyond the Last Path records his life during those terrible years up to the point when American troops released the remaining prisoners in Buchenwald.

Is it a testimony, or a work of fiction?

This book is very well written and the narration was good. It's an entertaining listen --- if such a thing can even be said about a book on this topic..

However, I felt the book lacks severely in accuracy and in its regard of historical facts.

To begin with, Buchenwald was NOT an extermination camp (!), but a concentration camp.
The distinction between concentration and extermination camps is crucial in understanding the conditions prisoners had to endure, in all aspects of life (and death). They are essentially different, and the atrocious conditions and death rate do not make Buchenwald a "Death Camp". The terminology transcends mere semantics, and in my opinion, claiming Buchenwald was a death camp undermines the entire testimony with the sense of writing for shock value. This is completely unnecessary given the subject of this book...

This is not a single example:
The song cited at the begining sounds very much like an English translation of the Jewish partisan song, originally written in Yiddish and attributed to Hirsh Glick of the Vilna ghetto; perhaps inmates at Buchenwald camp had sang it as well, but it is first and foremost the Jewish partisan song, and not as presented in the book.
Also for shock value, I suppose, is the claim that there were no children in Buchenwald. This is stated to highlight the children that do appear in the book, their affect on the other inmates and the relationships formed between them all.
But this is plain false, and the impression the author creates is wrong. Block 66 is a prime example, and Nicholas Waxmann writes about the underaged inmates in the concentration camps, including in regards specifically to Buchenwsld, in his book "KL" (which is available on Audible, and is a monumental source of knowledge). Also, the youngest inmate to be released from Buchenwald was about 3 years old (!) at the time of liberation.
There were several hundreds (or even more than that?) underaged youth and children imprisoned in Buchenwald, and the inaccuracies in the book are too confident for me to consider as the witness's subjective account of that place and time.

And why are characters in the book referring to Greek Jews incarcerated in Auschwitz, before the deportations from Greece to Poland had even started?
Why repeat again and again that it took 6 minutes to die by gasing, when this piece of data simply doesn't match what is found in most, if not in all research pieces and literature about Auschwitz, and other killing sites where gas was used. The author exagarets again and again - why? Was the way it was not horrible enough?..
Such is also the average "life-span" of an inmate assigned to work in the gas chambers, which is different than what in stated in the book - and yet again with much confidence and pathos but also with what seems to me like an agenda to create emotional impact at the expense of true commemoration.

I did not like how this book integrates memoir, testimony and fiction.
I felt the book is fiction seeking to deliver a story, rather than a testimony in prose seeking to commemorate a survivor's experience and these time and place in history.
All in all, I found it harmful and disappointing...

It is still an interesting listen and a well told story! But I think it should be taken with a small sack of salt, not just a grain, if one wishes to learn about history from it. I wish it'd be accompanied by extra reading and external resources...