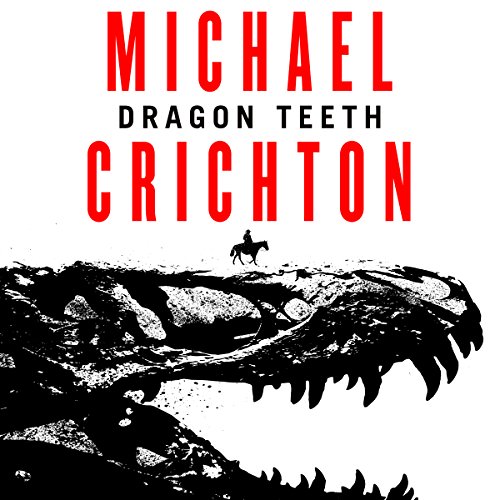 Michael Crichton, the number one New York Times best-selling author of Jurassic Park, returns to the world of palaeontology in this recently discovered novel - a thrilling adventure set in the Wild West during the golden age of fossil hunting.

The year is 1876. Warring Indian tribes still populate America's western territories, even as lawless gold-rush towns begin to mark the landscape. Against this backdrop two palaeontologists pillage the Wild West for dinosaur fossils while deceiving and sabotaging each other in a rivalry that will come to be known as the Bone Wars.

Into this treacherous territory plunges William Johnson, a Yale student with more privilege than sense. Determined to win a bet against his archrival, William has joined world-renowned palaeontologist Othniel Charles Marsh on his latest expedition. But Marsh becomes convinced that William is spying for his nemesis, Edwin Drinker Cope, and abandons him in Cheyenne, Wyoming, a locus of crime and vice.

Soon William joins forces with Cope and stumbles upon a discovery of historic proportions. The struggle to protect this extraordinary treasure, however, will test William's newfound resilience and pit him against some of the West's most dangerous and notorious characters....

Praise for Michael Crichton:
"One of the most ingenious, inventive thriller writers around.... Prey sees him doing what he does best - taking the very latest scientific advances and showing us their potentially terrifying underbelly. Another high-concept treat...written in consummate page-turning style." ( Observer)
"This is Crichton on top form, preying on our fears about new technology and convincing us that we aren't half as afraid as we should be." ( The Times)
"Mixing cutting-edge science with thrills and spills, this is classic Crichton." ( Daily Mirror)

What listeners say about Dragon Teeth

story telling of it's kind

take a piece of history, spin it into a story, so interesting and gripping that I can't drop until I finish

Love how well researched the history was - classic Crichton.

I enjoyed the whole story

Not as gripping as other Crichton stories, but well worth a listen.

Western with a difference

Book was recommended to me and it was an absolute gem a mix of genres that keeps you hooked from 1st word to the last. Thoroughly enjoyable.

WOW! I have both physically read this book and now listened to Dragon Teeth...twice!

This fictitious story wrapped in historic truths, transports you to the age of the Wild West and delivers an incredible insight into the Bone Wars as well as encounters with the infamous town of Deadwood and an introduction of one of the most famous western legends of all time...Wyatt Earp.

I can only imagine what this would be like on the big screen.

I cannot recommend this book enough, Michael Crichton you have done it again.

I found this rather a "thin" book. Weak, rather predictable plot, and weak one dimensional characters - as dead as the dinosaurs they were digging up. I search hard to find something positive to say and fail. Not "awful" but nothing to recommend it.

Enjoyable yarn but nothing breathtaking or ground breaking if I'm honest. Would make a reasonable short movie I guess..! And probably will.

Would you consider the audio edition of Dragon Teeth to be better than the print version?

not read the print but the audio book is excellent

What was one of the most memorable moments of Dragon Teeth?

I love the concept, palaeontology meets the Wild West

Have you listened to any of Scott Brick and Sherri Crichton - Afterword ’s other performances? How does this one compare?

no so I can't compare

not an emotional book but but really interesting and good changes of direction, well researched and entirely believable.

A good read (listen) and it would make an awesome movie

This was a compelling listen and altbough not totally factual, the use of the Marsh and Copes diaries and history of the time were well researched. A rattling good story anyway, with lots of atmosphere and excitement! The narrator, Scott Brick, was excellent and a perfect choice for the book.

An unexpected crate of gold.

As a huge Crichton fan my opinion is biased but still i want to go on and encourage anyone curious to give this a listen.

As someone who does not like the cowboy theme i come out of this wanting more. The story is yet again interesting and captivating. I did not think this story would be so exciting and constantly engaging as it turned out to be.

The only shame is that i can not see anyone being able to make a movie out of this. It would need a trilogy at least!

just a joy from start to finish

just a joy from start to finish, terrific blending of fact and fiction, with some twists you could not see coming