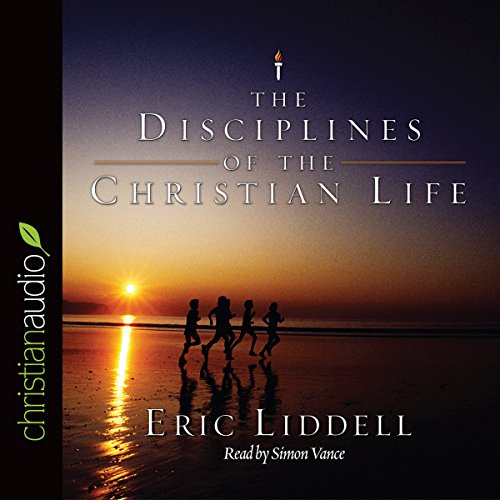 The Disciplines of the Christian Life

Eric Henry Liddell was a Scottish athlete, rugby union international player, and missionary. He is perhaps most well known as the subject of the Oscar-winning 1981 film Chariots of Fire, which depicted his experiences training and racing in the Olympics and the religious convictions that influenced him. In his book about spiritual disciplines, he outlines his own pattern for living, which has as its foundation a daily Bible-reading plan.

What listeners say about The Disciplines of the Christian Life

This book is constantly working on my heart as I surrender to God. Such powerful and challenging messages from the mind and heart of a hero for God. Eric Liddell. Truly a blessing.

Loved it, the material is relevant and useful for practical application. The narrator, with the wonderful Scottish brogue was easy to understand.

If you know GOD Word so what . This well have a big in pack over again. I have listen over and over . Knowing GOD well and follow his well and not our well . note our well has nothing to do with GOD .

This book is one to listen to daily. It's that good. The reader can get something new out of it repeatedly. Eric Liddell was a man who knew of what he was speaking about. He lived the disciplines of the Christian life in every way, in his complete dedication to the cause of Christ, be it through is missionary work and eventual death in an internment camp. May we all read and learn from his witness and what he is saying. Simon Vance completes the work. All around perfect.

Loved the Scottish voice that clearly read this. A Blessing with good Christian teaching of the Spirit led life. Highly recommended!

never going to put this done.

this audio book is constantly refreshing, constantly uplifting and constantly provides good reminders for any believer. it's one I'm probably never going to stop listening to and it's done with beautiful authentic Scottish style!