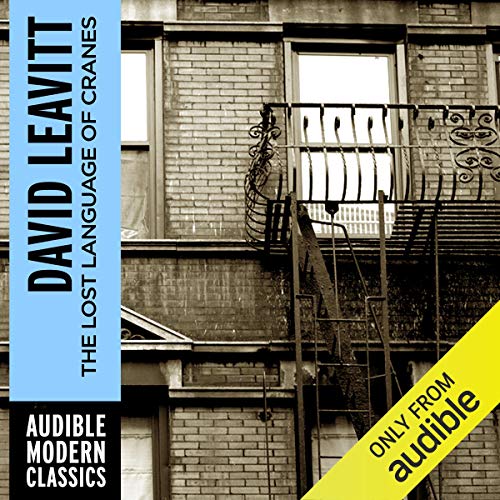 The Lost Language of Cranes

Philip's admission to his parents and his father's hidden life provoke changes that forever alter the landscape of their worlds.

"Fascinating. Lingers in the mind...Mr. Leavitt''s sense of pacing, his graceful sentences and his storytelling ability dovetail nicely." (New York Times Book Review)
"A brilliant, wise first novel. The delight of the book is Leavitt''s style. It flashes with pathos, anger, and camp wit; it rises to a subtle urban lyricism." (Vogue)
"An amazingly perceptive novel." (San Francisco Chronicle)

What listeners say about The Lost Language of Cranes

Bildugsroman for a gay man

If you could sum up The Lost Language of Cranes in three words, what would they be?

Hopeful, Desperate, Grey. Hopeful because at the end there's a thin veil of hope for all the characters. Desperate because fear is at the basis of many of the relationship in the novel. Grey because that's the color that comes to my mind if I think about the characters, the setting, the plot.

This is a bildungsroman for a young gay man and, at the same time, for a middle-aged man. They both have their path to follow and in the end they are on the same road.

Have you listened to any of Jonathan Davis’s other performances before? How does this one compare?

The Windup Girl. He's a very good performer. With that book I followed along with the text and his work was very, very good.

If you could take any character from The Lost Language of Cranes out to dinner, who would it be and why?

For a gay man, this is a must, Like "Maurice" by Forster. Even if you are not gay, there's plenty about relationships that makes the few hours spent reading the book well spent.

This is a beautiful book with characters who will stay with me for a long time. Owen and Philip are interesting and well-developed. Leavitt uses the fact that both men are gay as a way to show various struggles of coming out and self-acceptance. It is a lovely exploration of the reactions from those we love. As the mother of an LGBTQ child I found myself experiencing many feelings. I was at times sad for Owen, worried for Philip and angry at those they loved.

A must read for young gay boy & men

David Leavitt is one of my favorite & most influential authors. His ability to bring you into the lives of his characters is astonishing. I just finished the audiobook version & loved every minute of it. The discussion with the author at the end was a delightful bonus!

A book that will stay with you for a long time

Well written, the characters are true and come into your life with real meaning. It has been several months since I read this book but I think about it often, the character stay with you it's a great book with the feelings and gives you a lot to think about