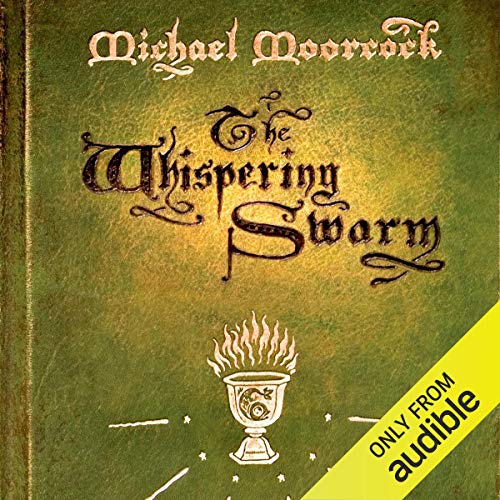 Almost anyone who has read or written science fiction or fantasy has been inspired by the work of Michael Moorcock. His literary flair and grand sense of adventure have been evident since his controversial first novel Behold the Man, from the stories and novels featuring his most famous character, Elric of Melniboné, to his fantasy masterpiece, Gloriana, winner of both the Campbell Memorial and World Fantasy awards for best novel. Neil Gaiman, Alan Moore, and Michael Chabon all cite Moorcock as a major influence; as editor of New Worlds magazine, he helped launch the careers of many of his contemporaries, including Harlan Ellison, Philip K. Dick, and J. G. Ballard.

Moorcock's first independent novel in nine years is a tale both fantastical and autobiographical, a celebration of London and what it meant to be young there in the years after World War II. The Whispering Swarm is the first in a trilogy that will follow a young man named Michael as he simultaneously discovers himself and a secret realm hidden deep in the heart of London.

What listeners say about The Whispering Swarm

What would have made The Whispering Swarm better?

It contains little to no plot, it simply rambles on and on...

What could Michael Moorcock have done to make this a more enjoyable book for you?

Provide a plot. He goes on and on without saying anything

I am outraged this horrible book was an editor's pick. I question if the editor really listened to the story? Even a month later I'm still outraged I trusted the editor and wasted a credit on this terrible, boring story.

If the story had a meaningful plot. The entire story is pointless and frustrating. Wholly unsatisfying.

What could Michael Moorcock have done to make this a more enjoyable book for you?

Had a satisfying reason to risk his so-called real life in an imaginary world.

Who would you have cast as narrator instead of Julian Elfer?

The narrator did a fine job.

Yes, if they've read some of Moorcock's work before. If not, I would probably suggest they start with some of his other work (Elric, Corum, etc.)

The way he pretty seamlessly interweaves the autobiographical parts with the adventure and fantasy parts. It's at times actually tough to tell where truth ends and fantasy begins, which is very cool.

Have you listened to any of Julian Elfer’s other performances before? How does this one compare?

No, I haven't. He's excellent though!

Somewhere in the middle the adventure aspects kick into higher gear.

This is a really interesting mix of autobiography, 17th century cavalier adventure, and also a bit of fantasy. I personally enjoyed the autobiographical parts (which in particular is most of the first half of the book), but this book is probably best for somebody who has already read some of his other books, or who has an interest in his life. Make no mistake, it is (in part) an autobiography. If autobiographies bore you, either look elsewhere, or if you do give it a try be patient through the first half until more of the adventure kicks in.

I bought this because the review said this author was a master of the fantasy genre. I wasted my time ... there was no true imagination. It could be the performance of the reader, but I will wait to get it from the library.

It's like Mary Sue fanfic with a male protagonist. Sigh. If you know you like Moorcock, you might be fine, but as a first time listener/reader, it wasn't what I expected.

Still not sure what to think

The first 70% of the book was pretty much a stale biography. It started to get really interesting later on, but then it ended.

This is the first book that I refused to finish

I'm a lover of books and I am determined to finish a book no matter how bad it might seem. I finally found a book so boring and uninteresting that I couldn't even force myself to finish it.

I made it to chapter 20 and it's essentially the autobiography of a random British guy who thinks he is more important to the literary community than he is. The description says this is a sci fi book, I call BS on that.

In an effort to finish the book I started letting it play at 3X speed, that helped a bit because it didn't feel as slow but still SO FREAKING BORING.

I can honestly say this is the worst story I've ever listened to. The narrator did the best he could to make the book interesting, the problem is there is nothing interesting about the book.

A lot of people are rough on this book, and I think that's primarily because they went into it with the wrong expectations. If you've been initiated into Moorcock's multiverse (which is practically a genre and category of fiction unto itself) then you will appreciate this introspective, epic, pseudo-historical and semi-autobiographical chimera of a novel. If you haven't, then maybe consider familiarizing yourself with his work first, before coming back around to this one. It's brilliant, but perhaps not overly kind to newcomers.

I started listening to this book a few months ago but could not get into it so stopped. I started again a couple of days ago but can only conclude the problem is the book not me. I am on chapter 30 of 55 but I doubt I'll carry on. It is mainly an autobiography with occasional visits to a fictional place / world, whatever, in London. I think even if the autobiographical content was removed it would still be dull.
The only intrigue for me was Alsatia, was it really a fictional place or the authors description of what was going on in his head while an inpatient at a mental health facility!

The worst book I ever tried to read. Don't waist your time like I did. I forced myself to chapter 11.

Didn't finished, story didn't hold my attention - too pretentious for me, not enough fantasy

Great fantasy autobiography to start then gets repetitive

The start of this book follows a slightly modified autobiography of Michael Moorcock. This aspect is very entertaining, however once he delves into his fantasy sanctuary hidden in London the moves between his wife and fictional lover go back and forward filled with repetitive anguish about who he should love. I don't think he can do good kitchen sink drama. When he gets back to the swashbuckling adventure he is on much safer ground. Good book but should have been edited down quite a bit in my opinion.

Fans of Moorcock will enjoy

Moorcock has gone bonkers. Not sure what the book was supposed to be.Started well but flagged from the middle