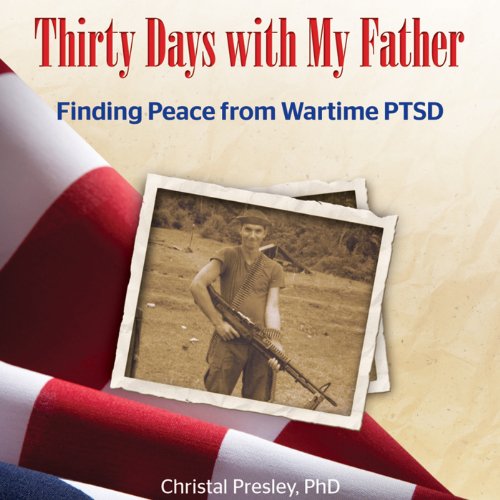 Thirty Days with My Father

When Christal Presley's father was eighteen, he was drafted to Vietnam. Like many men of that era who returned home with post-traumatic stress disorder (PTSD), he was never the same. Christal's father spent much of her childhood locked in his room, gravitating between the deepest depression and unspeakable rage, unable to participate in holidays or birthdays. At a very young age, Christal learned to walk on eggshells, doing anything and everything not to provoke him, but this dance caused her to become a profoundly disturbed little girl. She acted out at school, engaged in self-mutilation, and couldn't make friends. At the age of eighteen, Christal left home and didn't look back. She barely spoke to her father for the next thirteen years.

To any outsider, Christal appeared to be doing well: she earned a BA and a master's, got married, and traveled to India. But despite all these accomplishments, Christal still hadn't faced her biggest challenge - her relationship with her father. In 2009, something changed. Christal decided it was time to begin the healing process, and she extended an olive branch. She came up with what she called "The Thirty Day Project," a month's worth of conversations during which she would finally ask her father difficult questions about Vietnam. Thirty Days with My Father is a gritty yet heartwarming story of those thirty days of a daughter and father reconnecting in a way that will inspire us all to seek the truth, even from life's most difficult relationships. This beautifully realized memoir shares how one woman and her father discovered profound lessons about their own strength and will to survive, shedding an inspiring light on generational PTSD.

What listeners say about Thirty Days with My Father

For those with a family member with ptsd

The beginning of the book is a bit hard to get through as it is real and sad. But how wonderful to see the healing that was possible for them, as well as to appreciate our Vietnam Vets more. I am a Trauma Recovery Specialist, and while I would say if it triggers you to read this, go very slowly and get support, it can also be a very hopeful book.