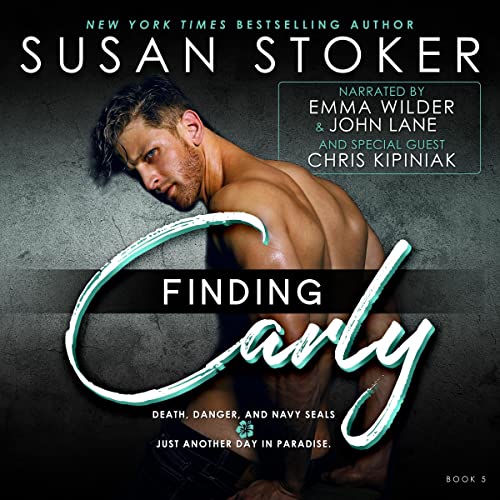 Jag helped her take control of her life back...but someone is watching and waiting for the perfect moment to finish what her ex had started.

On one unforgettable afternoon, a simple fluke kept Carly Stewart out of her crazy ex’s reach...landing her best friend in his clutches instead. It’s been months since the events of that day, when her friend was rescued and her ex, Shawn, died, yet the police are no closer to discovering who his accomplice was. And Carly is no closer to reclaiming her life, hiding in her apartment in distress, flinching at every noise and shadow. Her only saving grace is Jag, the Navy SEAL who’s kept her from completely losing herself to the terror.

Jagger Bennett will never give up on Carly. He understands what she’s going through better than most. He also knows she won’t let her ex control her from the grave for much longer, especially when he sees the first spark of anger peeking through her fear. He’ll help her defeat her demons, regain her confidence, get back to the person she was before Shawn Keyes...and in return, she could be the one woman who can help Jag conquer his past. If he’s able to put his own torment to rest, he’ll claim Carly for his own.

Shawn Keyes was my friend. My mentor. Now he’s gone. And I have no one. It’s all her fault. Carly Stewart. She’ll pay for everything she did to Shawn...to me...and she’ll pay soon. Before she can ruin another man’s life.

Finding Carly is the fifth book in the SEAL Team Hawaii series. Each book is a stand-alone, with no cliff-hanger endings.

What listeners say about Finding Carly

These are two characters that end up saving each other. The narrators did a great job especially when Jag opened up to Carly about his past. This was handled with sensitivity and changed the relationship dramatically. Jag was instrumental in helping Carly get her life back after suffering abuse from her ex-boyfriend. I loved her strength and ability to literally take her life back. This is such a fantastic listen and a powerful story.

Long Review but I was disappointed.

I have a few things to say, good and bad.

Narration for the Jag was good but when he changed his voice for the Carly, I couldn’t stand listening to the nasally whispery tone of it. Emma Wilder as usual was phenomenal.

This story… sadly didn’t even make my top 50 from Susan Stoker. I’ve read every single one of her books many times, her stories always offering me a form of escape and pulling me in until I can’t put the book down. However, it feels like the last two years her books have become so dull and boring and I’ve found she frequently used the same phrases in all her books. It’s hard for me to believe that every character from all of her books speak the same way…

So far in the Hawaii series, the only book that held my attention was Elodies, it was sooo good. There was action, suspense, and steamy scenes. It was emotional and I literally finished it in like four hours.

Throughout Carly & Jags story I was so bored, literally all of action in the entire book was at the very end, but why? And then Stoker doesn’t even give us details what happens afterwards! It took me five days to finish it because I could just not get into it.

(((SPOILER WARNING - at the end she has an underwhelming rescue and then goes home a few hours later. Then Carly & Jag just… chit chat like nothing happened. Only briefing over the fact that she was found on bird shit island! What happed to having an action packed rescue??? Jag and his team didn’t even find her… the coast guard did! What happened to the emotional rescue? the tear jerking reunion? I felt robbed!)))

I sat there and listened to over six hours of Carly talk about being scared to leave her house and glued to the hip with someone. Then, predictably, the moment she’s finally by herself… that’s when everything goes down.

Jag barely gets written into the story and for an MC… he felt more like a flat character. His only purpose was to move the story along and to provide growth for Carly’s character which to me, wasn’t note worthy. We get about half of a chapter that goes into his past after so long of being left to wonder and that was it. I feel like I barely even got to know him as a character. It was ALL about Carly.

Lexi, Kenna, and Now Carly’s story’s were all flops and it pains me to not want to read Ashlynn and Bakers stories. Fingers crossed they have more action in them, I miss the way Stoker used to write.

Overall, it was OK but I’ll never pick it back up to read. Give it a shot, you may love the book, everyone has their own opinions and preferences to what they like to see in books but for me, it was disappointing to read something so anticlimactic.

Overall, this is a really fun book!

I have listened to all of Susan’s seal team books leading up to this one. I feel this one has a slow start, but the middle to the end is quite thrilling. I was intrigued by the characters personal stories, it really drew me in. I feel Susan is a great writer and really makes you connect with her characters. All of her stories are fun, edgy, thrilling, and sexy. I love all of her seal team books, I’m hooked. Keep them coming Susan. Thank you.

absolutely loved this book! The story flowed very well and kept me engaged. Highly recommend this book along with any of Susan's books!!

She did it again!

I can't even say how much I love Susan's books! She never fails to entertain and keep me guessing. Loved this story and the characters.

Happy to finally get Carly’s story and it was worth the wait. Narrators did a wonderful job with their performances and brought the story and characters to life. I loved Jagger and Carly together and that they supported one another. My heart broke after learning of Jagger’s past but glad that he was able to confide in Carly. I really enjoyed how their relationship and feelings developed throughout this book and series. Looking forward to the next one in this series.

who won't fall for a SEAL coming to the aid of a damsel in distress? That's the story of Jag and Carly in a nutshell. She's afraid to venture out alone because her ex's accomplice remains at large. The abusive ex, who showed up at her job with a bomb, no less. Jag returns from a mission and intends to keep Carly safe until the guy is caught...trouble is that the identity of whom is unknown. As Jag and Carly spend time together, friendship becomes more, but will Jag let down his walls around his heart...and can he keep Carly safe? Another sweet story in the series.

This is the first time I’ve listened to a whole book. It was pleasantly surprising how easy it was to listen to. The fact that there was a different voice that did Jag helped a lot.

The story was well written. I love the way Carly decided to get her life back and how hard she worked to do it. The part that got me the most was the man having been raped. It seemed very true to what I believe are the true reactions of shame that victims feel. That he made it as long as he does without telling anyone- mind blown. Thank you Susan Stoker for releasing the audio book the week before the ebook.

Excellent! Many things to LOVE about this one!

Enjoyable story! It really brought out another side of a issue that is usually seen on the female side. This one really got to me because of the way that subject was written. I enjoyed learning about Cary and Jag story. Usually the female is the one I identify with and their story gets to me. Carly’s is good and I understood her fear and issues plus her kindness to Baker was a delight. In this story though Jag threw me for a loop. His attitude and thoughts surprised because I became shocked when certain problems came to the surface. I did love their time at The Ranch that they visited! Made me wonder if it is real? I think am going to google it.

I did love all the action, drama and suspense that come with a SEAL’s story. Fun and serious times with Jag’s SEAL brothers as well as the women's tribe. I do look forward to more from this author and in this series.

I did listen to this on audio. Three wonderful narrators helped bring this book to life. Emma Wilder is always a joy and she does an impeccable job! John Lane and Chris Kipiniak are both newer to me but did an excellent job portraying the males in the story. I particularly loved the voice of Baker.

like always lynsay writes . her story line are great. enjoy the narrative, characters and interaction of all the characters.

just when you think susan is settling her writing to military type suspense in thus series, she goes and changes it up...I mean totally changes it up.
This story has not only the h's angsty ordeal but addresses the H's trauma parallel to Susan's earlier books. 'Badge of honour series' and Seal of protection series'.
it's such a real modern day problem with the same sentiments and attitudes that compare to today. it's a brave topic to address and I applaude susan for it, although she has never avoided pieces like this before.
So before Jags situation came to light I had decided that this alpha man is the biggest gentleman of all the men that I can recall susan writing. however, now I understand the reasoning behind it.
it was wonderful to see the h emerge from the end of kennas story through to this story. she has moved from strength to strength and ended up supporting as good as she got. I mean chapter 19..phew!
the feel goods that emerged with the other team members and their gals were heart warming and I was so happy to hear Baker emerging...(he's another Tex!)
this suspense rolls on from Kenna's story so we have some insight but are still kept guessing... its wonderful trying to guess.!!
now the narrator's...oh lordy lordy, lordy...just loooove John Lane..his voice is so deep, perfect for the alpha voices especially Bakers. I always beeline for his narration in other books. Emma is fantastic as usual, her male voices are admirable and I just love her tempered voice for Carly.
all of the stories in this series has been unique and how susan comes up with these plotlines is a testament to her amazing mind. I mean Monica's story was suspense plus and even though all of them are individual stories susan finds a way to loosely connect them...
just love the topics of family, Respect. Loyalty, love and trust that susan always depicts in her novels.