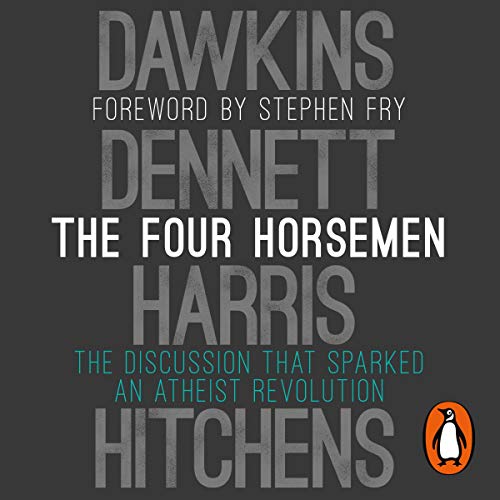 Known as the ‘four horsemen’ of New Atheism, these four big thinkers of the 21st century met only once. Their electrifying examination of ideas on this remarkable occasion was intense and wide-ranging. Everything that was said as they agreed and disagreed with one another, interrogated ideas and exchanged insights - about religion and atheism, science and sense - speaks with urgency to our present age.

Questions they asked of each other included: Is it ever possible to win a war of ideas? Is spirituality the preserve of the religious? Are there any truths you would rather not know? Would you want to see the end of faith?

The dialogue was recorded and is presented here with new introductions from the surviving three horsemen.

With a sparkling introduction from Stephen Fry, it makes essential listening for all their admirers and for anyone interested in exploring the tensions between faith and reason.

What listeners say about The Four Horsemen

Tequila for the soul

A delightful opening by Stephen Fry. A vibrant, colorful discussion with my agreements and disagreements, extending but not limited to religion, Islam, morality, determinism, quantum physics and other mysteries of the universe.
Caution: This isn't for the casual listener. Each of the horseman have different approaches to a problem and it helps to know something from their backgrounds

Four horsemen riding similar horses looking for answers, that’s great but believing that no other animals can be trained & used for riding to look for answers ,not great .

The conversation is incredibly thought provoking and was a pleasure to listen to. The introductory remarks and foreword by the authors and Stephen Fry were like cherry on top of the cake. Overall a must read, listen and/or watch conversation!

A good book to understand their point of view on monotheism and religion in general.
If you wish to just listen to their conversation it is available on YouTube.
This audiobook contains a bit more content. There is a foreword by Stephen Fry. There are three more inciteful peices by Richard Dawkins, Daniel Dennett and Sam Harris.
Hitchens is not with us now but listening to him speak is always a delight.
All in all its a must for all trying to understand their stand against religion, as atheists.

These Gentleman are very big thinkers

Sometimes Christopher Hitchens' voice is dim, and white noise interrupts Dennett, but otherwise this is a philosophical masterclass.

The original YouTube video contributed to much to my own intellectual development. I mostly bought the audible book to support the cause but the foreword and 3 essays at the start were an added joy.

To get these four people together to discuss different areas of interest, all relating their personal views with each other is forever a one off.
To appreciate the acquired knowledge and experience that develops their thoughts is awe inspiring.
It generates as many questions as it answers and is truly a great occasion we can listen to.

The centrepiece of the book is the chat between the famous 4 on their perspectives on a range of faith and religion-related topics. There are no really original ideas here for readers familiar with their writings and discussions, but it is interesting to hear about their experiences and people's reactions to their ideas. For readers new to their thinking, the book constitutes a short and useful introduction to the what and why of the atheist position.
A useful take-away, from Dennett if I remember correctly, is that for those of us convinced of the soundness of the atheist perspective, it is important to quietly make clear to friends and acquaintances that this is where we stand. Not on a soapbox, but with two feet on the ground, the mind open and the imagination soaring. Despite the sparkling clarity of the sanity and reasonableness of the atheist stance, many people have simply not heard these ideas presented in a calm way. So we are encouraged to proselytize or maybe should we say Fight the Good Fight ?

A value-added dimension is provided by Stephen Fry's witty and admiring introduction.

Ok so you’re all atheists - just get on with it ! Stephen Fry is more ubiquitous than God it’s him that should be denied existence in the collective consciousness

A thought provoking symposium by four great minds. Balanced and self critical. Makes you proud to belong to our species, again.

Not all atheists lead such exemplary, impactful thoughtful lives. Those of faith wanting to make the world a safer place must get over the endowment effect of their assorted debunked dogmas, and behave well simply because they can, minus the various twisted, tyrannical, mystical bullies.

what a meeting of minds. such clear thinking.

a rare meeting of four genius men about a rather taboo subject. food for thought

A must listen for all followers.

The original conversation in all its glory, new pieces from Dawkins and Dennett are insightful and bring the conversation further forward in continum.
A fitting forward by the great Stephen Fry to the inspiring Four Horsemen and a sweet moment to his late friend Hitch.

Fantastic book, and a privilege to gain an incite in to the minds of four great intellectuals.

A joy to listen to an articulate conversation between people who have the knowledge and ability to stimulate thought.

Should be much much longer. I only gave it 4 stars for performance because the length of the book just doesn't cut it, it leaves you wanting more. Great book, well worth a download. RIP Christopher Hitchens.

You will enjoy this conversation if you have read their work. I will say however, you'd be better off finding YouTube videos on these men than spending you money here.

Brilliant to see how mature conversationalists can have an unmediated discussion about topics that they are passionate about, and yet maintain respect and genuine interest in each other’s opinions.

Loved it. I only wish it was possible for another edition. R.I.P Christopher Hitchens.
The interplay of these 4 like-minded but interestingly different intellects is fascinating

Athiestism can only exist if it has something to oppose.

The four participants are well educated and some have an amazing command of the English language.
Some appear to love the sound of their own voices.
Whilst they challenge the Jesus story and other biblical stories and frankly some are very shallow they choose to ignore the principles and morals.
These are the essential elements of Christianity.
Even the confirmed atheists are happy to live and benefit under the umbrella of Christianity.
I did not pick up the key elements of Athietism. Just continual criticism of Christianity.
Are they promoting law of the jungle as means of living. If so they will be the first devoured.
I am no better, I suppose, happy to live with the benefits of Christianity but not practice. Perhaps my early exposure to Christianity prepared me for life.
Like democracy, Christianity may not be perfect, but it is streets ahead of any alternative.

I miss Hitch. Maybe Stephen Fry can fill in for him?
I wonder how different the discussion would be if they did a reboot today?

I kept asking myself what the purpose of the conversation was, and concluded that the whole time was spent as an egotistical exercise.
There was an absence of enquiry from each other, and nothing of substance was said.
It was a big disappointment for me, as I wanted to learn
from these experts.

It was ok, but very short for full price or credit if you're listening to this via audible.. anything under 3hrs long should be cheaper than the same price as an 18hr long listen..

Exactly what I expected it to be

Four very intelligent men come together to discuss a topic I'm passionate about. What more can I ask?

Eye opening and balanced discussion of ideas. The gentlemen discuss the pros and cons of religion, with honest acceptance of what they do and don't know.