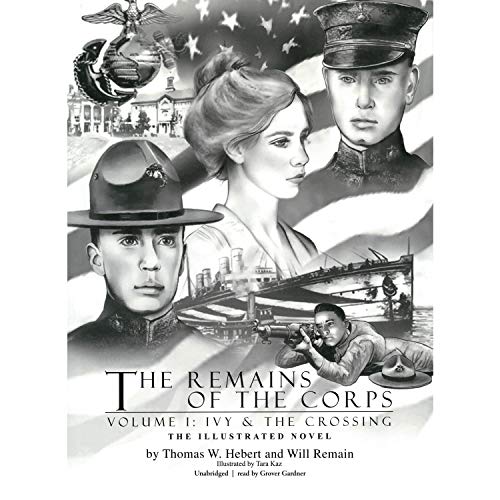 The Remains of the Corps tells the story of a fictional United States Marine Corps family history and is a tribute to this legendary fighting force.

The United States Marine Corps has been a household name for generations. True to the lyrics of its official hymn, the Corps has fought its country’s battles in the air, on land, and sea for more than 200 years. For many, serving in the Corps has been and continues to be a “family business”. The fictional Remains (an anagram for Marines) are one such family. Told by a third-generation Marine and Vietnam veteran, the fictional Will Remain, the saga begins with his grandfather Kenneth Remain - born in Worcester, Massachusetts, and educated at Harvard College. They, and other members of their family, are Marines, but there is more to their stories - much more. Figuring prominently in their lives are the born-to-the-purple Kenneth Blakeslee and the beautiful KatyKay Mulcahy.

In a companion PDF, the listener is also introduced to the 57 enlisted men of the fictional Fourth Platoon of the 87th Company of the true-to-life Third Battalion of the Sixth Marine Regiment, and 24 fictional officers of that battalion. Author Will Remain informs the listener with a tightly drawn narrative for each of these officers, NCOs, academics, cadets, athletes, farmers, tradesmen, and white-collar workers as they head off to war. Illustrator Tara Kaz breathes life into their stories with more than 50 sketches.

What listeners say about The Remains of the Corps, Vol. 1

Remains Of The Corps is an outstanding novel. With his insightful descriptions and dialog the author makes you feel like you are standing alongside the characters as their journey begins. I am looking forward to the next volume in this wonderfully written story. I also recommend that purchasers of the audio book take the time to browse through the illustrations in at accompanying pdf file.

Grover Gardener's voice is pleasantly clear and articulate with the perfect amount of gravel, which gives him such a relatable down-to-earth feel that keeps you listening. His voice melds beautifully with the tone of this historical drama tha is filled with real-life characters from all walks of life brought together by the circumstances of the beginning of WWI. Gardener truly feels like he's enjoying the story as he reads and not just saying words from a page.